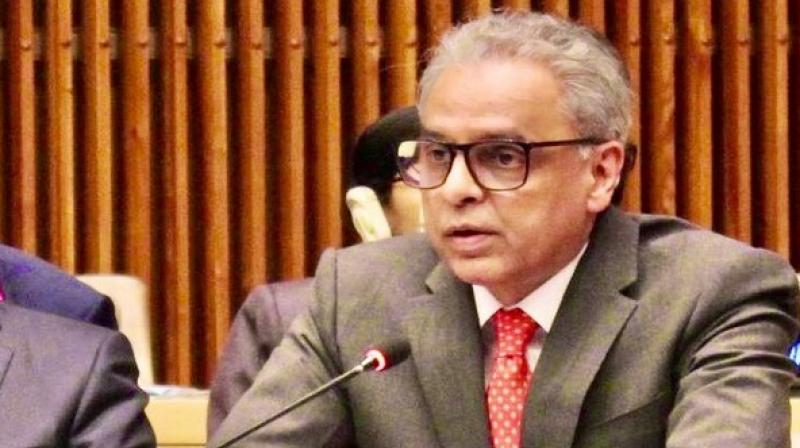 Stressing that India is a part of the SCO dialogue mechanisms in counter-narcotics, Akbaruddin said that New Delhi is looking forward to organising an SCO event in the country on combating illegal financial flows related to narcotics trafficking in 2020. (Photo: ANI)

New Delhi/New York: Calling for zero-tolerance approach against terror organisations and their financial activities, India on Tuesday said that the international community needed to be ahead of new trends and technologies which can be achieved by working together to tackle the menace "bereft of double standards".

Speaking at the third high-level special event of United Nations (UN) and Shanghai Cooperation Organisation (SCO) titled -- 'Cooperation to promote peace, security and stability: preventing the linking of terrorism with organised crime and its financing through drug trafficking here, India's Permanent Representative to the UN, Syed Akbaruddin highlighted the nefarious activities of terror outfits designated by the world body including the Islamic State, Lashkar-e-Taiba and Jaish-e-Mohammed.

"UN-designated terrorist organisations such as ISIL, Al-Shabab, Al-Qaida, Boko Haram, Lashkar-e-Taiba and Jaish-e-Mohammed, continue to destabilise entire regions through their cross-border financing, propaganda, and recruitment, including by using - rather abusing - evolving global public goods such as the cyberspace and social media. Terrorist organisations are engaging in lucrative criminal activities such as human trafficking to raise funds," he outlined.

Akbaruddin said that the criminal groups have joined hands with terrorists to provide illicit financing through drug trafficking, arms dealing, selling looted antiquities, money laundering and counterfeiting. "Depending upon the circumstances, these groups can coexist, cooperate and even converge," the envoy said.

"In our region, there are examples of how drug trafficking finances these networks. According to the latest UNODC's Afghanistan Opium Survey, of an estimated USD 29 million generated in 'illegal taxation' of opium revenues in Afghanistan in 2018, USD 21 million was said to be collected by anti-government elements, including the Taliban," Akbaruddin said, adding that cross-border nature of such fused entities and their financing activities poses a serious challenge, as coordinated international response is too slow to be effective in most cases.

He also called on anti-terror financing watchdogs such as the Financial Action Task Force (FATF) for laying the foundation of a "coherent response" by taking stringent steps to address issues of the narcotics trade, illegal financing and counterfeiting.

"Terrorist organisations have to recruit and train fighters, buy weapons and equipment, wage propaganda campaigns, and plan and carry out operations. These activities cost money, so understanding how groups raise, store, move, and spend that money helps bringing terrorists to justice and deters others from harbouring them or funding or joining their organisations," Akbaruddin said.

Calling on the UN to increase cooperation and coordination with these counter-terror financing bodies, Akbarudding said that "there needs to be much greater rigour and transparency in the implementation of instruments already at the disposal of the UN, such as the Security Council regimes targetting terrorist entities and individuals".

He also said that efforts at concluding the Comprehensive Convention on International Terrorism (CCIT) have seen little progress at the UN and require reinvigoration.

"An added challenge is the role of new and emerging technologies, including virtual currencies, encrypted communications and artificial intelligence. Such technologies are making networks loosely associated on the ground, closely intertwined in cyber-space," the envoy further highlighted.

Underlining the need to address these challenges by increased sophistication and a coordinated international response, with real-time intelligence sharing, capacity building and technology assistance, Akbaruddin said, "While we have an expanding body of international legal instruments to prevent transnational organised crimes in specific sectors, there is still no common global strategy to curb criminal activities in cyberspace."

"The Christchurch Call which brought technology companies and governments together to commit to 'eliminate terrorist and violent extremist content online' is one way forward," he added.

Akbaruddin further said, "The terror-crime nexus is an existential global threat, the contours of which are mutating every day. To combat this menace we will all need to keep ahead of the new trends and technologies -- something that can only be achieved if we work together, with a zero-tolerance approach, bereft of double standards. India is committed to supporting such cooperation with the UN system and its global partners."

The diplomat said that the SCO's Regional Anti-Terrorist Structure (RATS) is a useful mechanism for coordinated action against terrorism and drugs. He also said that India welcomes the expansion of SCO's cooperation with UNODC and the Central Asian Regional Information and Coordination Centre for Combating Illicit Narcotic-Trafficking.

"On its part, India has acceded to the 'SCO Agreement on Cooperation in Combating Illegal Trafficking of Narcotic Drugs, Psychotropic Substances and Precursors' which provides for cooperation in the analysis of crimes related to illicit narcotic-trafficking and harmonisation of national legislation in the fight against narcotics trafficking," Akbaruddin outlined.

Stressing that India is a part of the SCO dialogue mechanisms in counter-narcotics, Akbaruddin said that New Delhi is looking forward to organising an SCO event in the country on combating illegal financial flows related to narcotics trafficking in 2020.

"This will be an opportunity to share skills and experience in various crime prevention areas, including law enforcement, forensic science and cyber-security," he added.