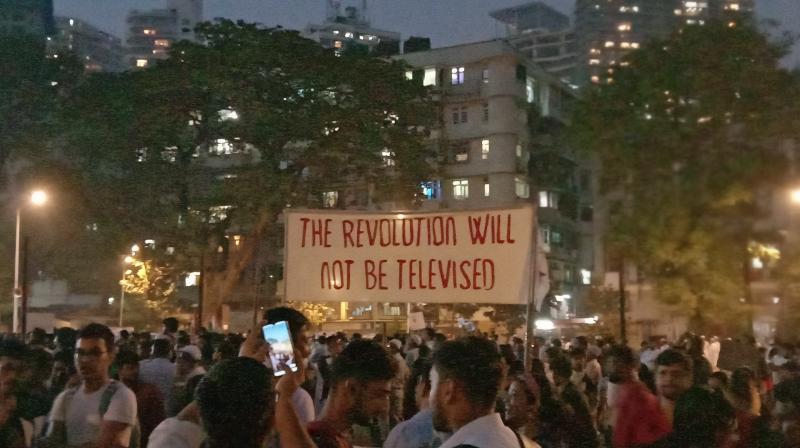 Hundreds of people took to the streets on December 19 in Mumbai and represented their dissent on the new citizenship law and NRC. (Photo: File)

While Section 144, which doesn't allow the gathering of more than four people in a public place, was enforced in cities like Delhi, Bengaluru, and Mangaluru, Mumbai witnessed peaceful protests.

One such person serving water to the protestors said that the National Register of Citizens (NRC) was one-sided. "Ye pakka hai ki aap  dharam ke basis pe kama rahe ho." (It is certain that  you're making money on the basis of religion.)

Pointing out to the large crowd, walking towards the ground, he said, "So many people have taken to the streets but just because you have the majority, you'll do anything? It is wrong."

He further said that his father was born in the year 1936. "We have our Passport and Aadhar Card. But how will we get the documents required to get registered? Let's see what the government will do about it."

Among quite a number of artists present in the protest, some were actor Jim Sarbh, filmmaker Anurag Kashyap, comedian Kunal Kamra and journalist P Sainath.

Expressing his views about the National Register of  Citizens (NRC), actor Jim Sarbh said that the grounds for acquiring citizenship is religious persecution.

"Then why give special status to certain religions? Let the burden of proof of persecution fall equally on Hindus, Sikhs, Parsis, Muslims, atheists, adivasis, tribals etc"

He further said he did not view the act as a stand-alone item but also it's context against the backdrop of history.

Sarbh elaborated, ''In the preceding years, starting from the Gujarat riots, the rise and spread of the Rashtriya Swayamsevak Sangh (RSS), the renaming of cities and the retelling of our historical past, the gau rakshaks, the lynchings, the internet shutdowns, the cavalier attitude regarding the Constitution on Kashmir and many other states. The appointment and office of terror accused and rapists and many more examples.''

He said there has been clear and building proof of devices in politics and intimidation and marginalisation of  Muslims.

''Of course, there is no evidence of improved  economy, instead, we are experiencing all-time lows and what better distraction than unifying force against a common enemy?'' Sarbh asked.

''This act and the potential murky implementation of soon to come NRC make me feel like this law is one more nail in the coffin of democratic, secular India. Also, if there is any  dissent or protest, one is met with violence or the threat of  violence.''

Danish Husain, a playwright, expressed his dissent. ''This is a discriminatory act. An act not in the spirit of our constitution. An act that has not been thought through. An arbitrary act. This act is a violation of whatever the constitution stands for in this country,'' Husain said.

When asked what he thought of the future of this nation, Husain said, ''The future of this country is bright. People will not live with this kind of arbitrary act. This act will eventually be thrown out.''

Angika, an Assamese protestor, said she was living in the mainland because her parents were a part of the protests when the Assam agitation occurred which led to the signing of the Assam Accord.

''They had lost at least a year of their student lives to these protests  and feel very angered by how the media has been only paying attention to the anti- Muslim and police violence taking place. It is absolutely important to condemn that. My whole family condemns that but we are witness to what the government is trying to do by blocking the internet in Assam. I want to represent that side of the argument as well.''

She expressed her dissent saying that they (the Assamese) were promised something and that their accord has been violated.

''The date has been pushed up to 2014 and our demography is changing so we are already under threat of losing our indigenous people,'' she said.

P Sainath, author of Everybody loves a good drought noticed the absence of mainstream media at the occasion and said, ''The notable absentee here is your mainstream media. They are not here. This is a working day in Mumbai.  Fantastic turnout and a lot of people have left. They have locked the gates. There are as many people outside as there are inside. I think its a tremendous response and many others are taking place across the country.''

''People have gathered here to show that they are together and it makes a hell of a difference,'' he added.

Anurag Kashyap, filmmaker, expressing his views said,  ''We are dealing with a very egotistical and stubborn government and this just can't be a hormonal excitement of wanting to be part of the process. It has to be consistent and continuous. I hope this protest can give courage to  other people to come out on the streets and actually put fear aside and join in.''

''Our hope is the Constitution and if we fight to protect the  Constitution, we'll get past this.''

A poster made by Tyler Street Art caught everyone's eye. It read, "This revolution will not be televised.''

Kunal Kamra, a notable comedian, said, ''The crowd is so overwhelming that U2 will perform at the end.''