2 dead in police firing in Mangaluru, 1 in UP; curfew imposed in Karnataka town. 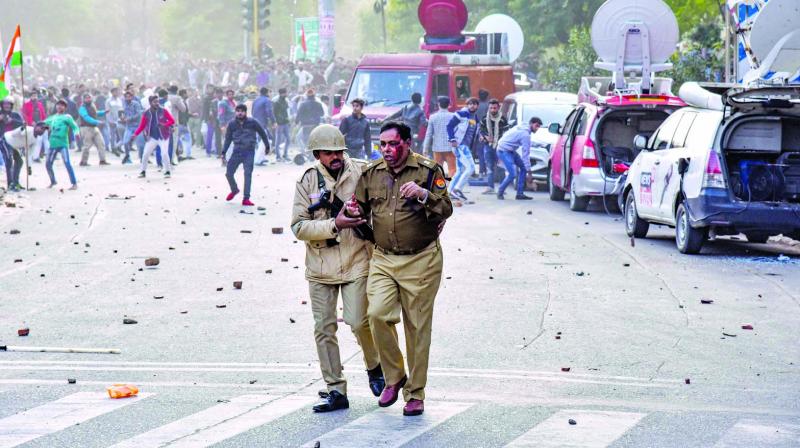 An injured police official is rescued by his colleague during violent protests in Lucknow. (Photo: PTI)

New Delhi/Bengaluru: Rage and anger against the Citizenship Amendment Act (CAA) poured out on streets across the nation on Thursday as ordinary citizens, students, writers, activists, artists, Opposition parties and film stars came out in large numbers to register their protest against the law they view as an attempt to divide India on communal lines.

Though most protests were peaceful, in some places, including Lucknow, Mangaluru, Ahmedabad and Patna, crowds turned violent. Public property was vandalised and police was pelted with stones. To disperse the crowds, police resorted to lathicharge, firing teargas shells and even firing in the air.

In Mangaluru, two people were killed in police firing during the anti-citizenship law protests. Curfew has been clamped across the city, while Internet connections will remain shut for 48 hours in Mangaluru city and Dakshin Kannada district.

In Lucknow, where chief minister Yogi Adiyanath said the police has been asked to deal with protesters strictly, incidents of arson were also reported, with media OB vans and police vehicles being set on fire. There were also reports of a death and injuries to cops.

In Lucknow, a man died of a firearm injury he allegedly suffered while passing by a violent protest. Uttar Pradesh police chief O.P. Singh said the death was not linked to the agitation or any police action.

In anticipation of Thursday’s protests, the Centre and some state governments, particularly BJP-ruled Uttar Pradesh and Karnataka, had raised the iron curtain by imposing Section 144 CrPC (prohibitory order against assembly of more than four people) and heavy security bandobast.

Large number of security forces and police officials in riot gear were deployed in several cities across the nation in a bid to clamp down on the protests.

Mobile and Internet services, including voice calls, were also suspended for varying periods in several cities, including the national capital.

In Chennai, three universities were shut down, while in Uttar Pradesh the entire state was locked down through prohibitory orders.

Defying the imposition of Section 144 CrPC and despite the large police presence, protesters across several states marched peacefully waving the Tricolour and holding up placards against CAA and the National Register of Citizens (NRC). In several cities they gathered at maidans to express their commitment to a secular India, in solidarity with Muslims who are being targeted by the CAA and NRC.

The protests led to massive traffic jams that paralysed parts of various cities. While central Delhi was badly affected, there was an 8 km long jam along the roads from Gurugram to Delhi as every car was being checked by the police. Several people missed their flights and airlines had to either cancel flights or reschedule them.

In Mangaluru, people started gathering on Thursday afternoon to hold a protest rally near the district collector’s office situated close to the bustling private bus stand at Bunder despite the district administration clamping prohibitory orders under Section 144 CrPC on Wednesday night.

Initially the gathering of protesters was small. However, in an hour the number swelled and despite police asking them not to assembly, people continued to pour in and shout slogans. Some also sat on the road, blocking traffic near the bus stand, forcing the police to resort to lathicharge and firing.

Police sources said protesters tried to lay siege to the Mangalore north police station and tried to attack police personnel, following which force was used to disperse them, including firing.

Two persons received bullet injuries and they later succumbed at a hospital, police confirmed. They have been identified as Jaleel (49) and Nausheen (23).

In other cities, including Delhi, scores of peaceful protesters were stuffed in buses and moved from protest venues by the police, only to find that more people came out on roads to oppose the CAA, NRC and police brutality in Jamia Milia Islamia, Aligarh Muslim University and Assam.

Unfazed by the nation-wide outrage, the BJP continued to flex its muscle

with the party chief, J.P. Nadda, asserting that not only will the “CAA be implemented, but the National Register of Citizens (NRC) will also be brought in.”

In Bengaluru, around 200 protestors, who were joined by prominent  historian Ramachandra Guha in their “Naavu Bharatiyaru”  and “Hum Bharath ke log” agitation, were rounded up by the police and taken away in buses as they refused to disperse.

While Mr Guha was detained as he was talking to media outside the Town Hall, condemning the Union government for introducing a legislation like the CAA, a large number of volunteers, including teenagers and young women were dragged into buses by the police as they resisted arrest. There were reports of three male cops manhandling a girl student and of another student suffering a dislocated shoulder in a scuffle with the police.

Mr Guha, who was carrying a placard of Mahatma Gandhi and B.R. Ambedkar, later condemned the crackdown. “British laws are being used against us… I feel sorry for the police who are acting at the behest of their political masters sitting in Delhi who are paranoid and scared. Our home minister (Amit Shah) would not dare allow a peaceful protest. Everyone should stand up against this,” he said.

In Delhi, various Metro stations were shut and top leaders of the Left parties, including D. Raja (CPI), Brinda Karat, Sitaram Yechury (CPI-M), Congress’Ajay Maken and Sandeep Dikshit, and Yogendra Yadav (Swaraj Abhiyan) were picked up from Mandi House and Lal Quila. They were later released. “It was a peaceful protest and suddenly we were surrounded by police. How many people can you detain,” said CPI-M leader Brinda Karat who was detained for a while.

Chanting slogans and carrying placards, the protesters later gathered at Delhi’s Jantar Mantar where they continued to hold fort till late Thursday evening amid huge police presence. Water cannons and riot police were kept in readiness for crowd control but no incident was reported except touching gestures of Gandhigiri with young protesters offering roses to police officials in riot gear.

“My dad thinks I’m studying history. He doesn’t know I am busy making history,” read the placard of a young girl student who smiled and offered a rose to police.

“What Delhi Police did at Jamia and UP police did at AMU was very shameful. You too may have children going to universities. How will you feel when they are beaten up brutality,” several protesters told police personnel at Jantar Mantar.

“What can we do, we had to follow orders, we have a job to do,” said most of the policemen with many conceding that police action on Sunday in Jamia was “wrong.”

At Jamia, students formed a human chain around Muslims as they performed Namaz in the afternoon.

The protests on Thursday were interesting in other ways too. “Contingency Plans” were circulated among protesters, alerting them of the possibility of “miscreants” and “anti-social elements” mingling with the crowd to spoil the protest and give it a violent turn.

With Internet and phone services shut in large parts of UP and several parts of Delhi, software experts gave out details of alternative communication Apps that run without Internet.

In Ahmedabad, protesters were seen singing songs and raising slogans even while they were being detained at police stations. In fact, this was a familiar scene in several places where students were detained.

In Kerala, activists of the Left parties took out a protest march and burnt an effigy of Union home minister Amit Shah.

In Chennai, noted Carnatic music vocalist T.M. Krishna, and Tamil actor Siddarth participated in a protest demonstration against the CAA.

In Kolkata, chief minister Mamata Banerjee addressed a rally criticising the CAA and NRC. “Just because the BJP has got the majority doesn’t mean that they can do whatever they want. If the BJP has guts, it should go for a United Nations-monitored referendum on the issue of Citizenship Amendment Act and the NRC. Let there be an impartial organisation like the UN or the Human Rights Commission conduct it,” Ms Banerjee said.