31 Rohingya in limbo on Bangladesh-India border

This group crossed barbed-wire fences along Indian part of border, but Bangladesh border guards stopped them from entering their territory. 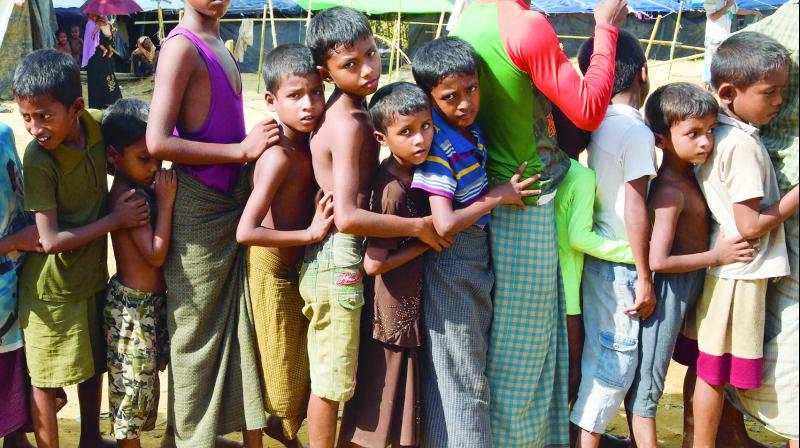 Senior officials from both sides held a meeting on Sunday, with Dhaka insisting that New Delhi take the refugees as they had Indian health cards and documents issued by the UN refugee agency. (Photo: AFP | File)

Dhaka/New Delhi: 31 Rohingya Muslims including 17 children remained stranded on the India-Bangladesh border after three days, Dhaka officials said on Monday, as both sides refuse to accept them.

As many as 1,300 Rohingya Muslims have crossed into Bangladesh from India in recent weeks as fears of deportation to Myanmar spark an exodus.

The latest group crossed barbed-wire fences along the Indian part of the border, but Bangladesh border guards stopped them from entering their territory. "They are now living in two tents provided by Indian border forces on the border's zero line," Mannan Jahangir, a local government official at the Bangladeshi border town of Kasba, told AFP.

Lieutenant Colonel Golam Kabir, a Bangladesh border guard commander, said the group first arrived at the border from the Indian state of Jammu and Kashmir on January 18.

Senior officials from both sides held a meeting on Sunday, with Dhaka insisting that New Delhi take the refugees as they had Indian health cards and documents issued by the UN refugee agency.

New Delhi has faced sharp criticism for turning members of the persecuted minority over to Buddhist-majority Myanmar in recent weeks, including from the United Nations and rights groups.

India, which is not a signatory to the UN Refugee Convention, arrested 230 Rohingya in 2018.

Bangladesh is already hosting around a million Rohingya in giant refugee camps in the country's southeast, three-quarters of whom fled a Myanmar military crackdown in August 2017.

UN investigators have said senior Myanmar military officials should be prosecuted for genocide in Rakhine state, but the country insists it was defending itself against militants.

Nayana Bose, a spokeswoman for the Inter Sector Coordination Group (ISCG), which includes UN agencies, said last week the pace of new arrivals from India had escalated since January 3.

Rohingya for decades have faced persecution and pogroms in Myanmar, which refuses to recognise them as citizens and falsely labels them "Bengali" illegal immigrants.