Most of the regional parties in the northeast are opposing the Bill, but not on the pretext of its being communally biased. 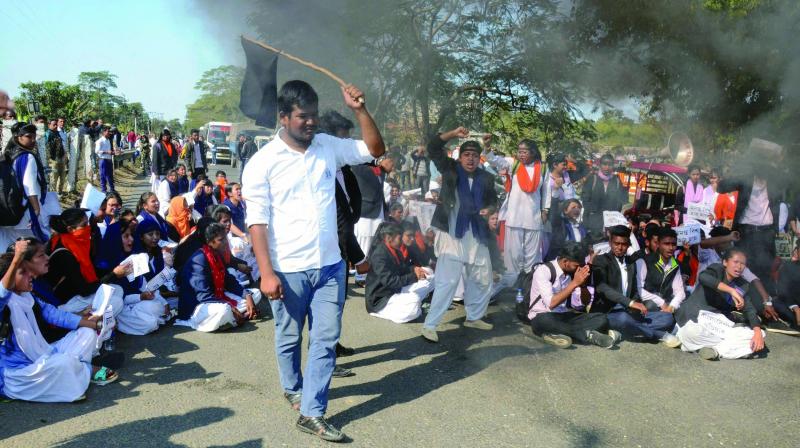 A file photo of college students blocking NH 37 in protest against the Citizenship (Amendment) Bill, 2016, in Dibrugarh in Assam.

The Assam govt admits that they need to assimilate Bengalis to defend the existence of indigenous people among an overwhelming population of Bangladeshi migrants who came to Assam between 1951-1971 and got citizenship.

Guwahati: The ongoing protest against the controversial Citizenship (Amendment) Bill, 2016, is not new to Assam as it has always been in flux with socio-political churnings plaguing the state from time to time.

The Bill-related concerns over religious identities, demands for tribal recognition, questions of legality and illegality, changes in the demography of various groups etc, have instilled a sense of insecurity and fear among different sections of Assam’s indigenous population.

The political observers refer instances that since the 2014 Lok Sabha elections and Assembly elections in recent years, most of them have supported or allied with the BJP and are a part of the BJP-initiated Northeast Democratic Alliance (NEDA).

The Central government says that the amendment is for migrants who came through the eastern and western borders because of religious persecution and are staying in India. The entire country will share the burden of these migrants as the Bill facilitates opportunity to such migrants to take citizenship in any part of the country.

Those opposed to Bill argues that with the Citizenship Bill, the government plans to change the definition of ‘illegal migrants’. The Bill seeks to amend the Citizenship Act, 1955, by providing citizenship to persecuted Hindus, Sikhs, Parsis, Buddhists, Jains and Christians from Bangladesh, Pakistan, and Afghanistan. It will allow those entering India till December 31, 2014 to be eligible for citizenship and thus pushes the cut-off date from March 24, 1971, as agreed under Assam Accord. The Bill categorically excludes Muslims.

Noted intellectual Hiren Gohain, spearheading a movement against the Bill, says that it is likely to “disturb” the state’s tradition of tolerance and coexistence among various faith systems. “Neither is fanaticism of one section or chauvinism of the other welcomed by people here,” says the Cambridge scholar.

Those opposing the Bill also flag the alleged communal tag to it as they point out that it tampers with the essence of nationhood by basing citizenship on religion. It is also a reflection of the ruling BJP’s long-term vision of building a Hindu Rashtra.

Insiders in the BJP admit that it has been an attempt by BJP and Rashtriya Swayamsevak Sangh (RSS) to reconfigure Assamese-Bengali relations in Assam.

Assam finance minister Himanta Biswa Sarma admitted that they need to assimilate Bengalis to defend the existence of indigenous people among overwhelming population of Bangladeshi migrants who came to Assam between  1951 and 1971 and got citizenship because of AGP’s mistake. The All Assam Students’ Union (AASU), which is agitating against the Citizenship Bill, has turned down the Union home ministry’s offer to resolve the differences over the legislation through dialogue.