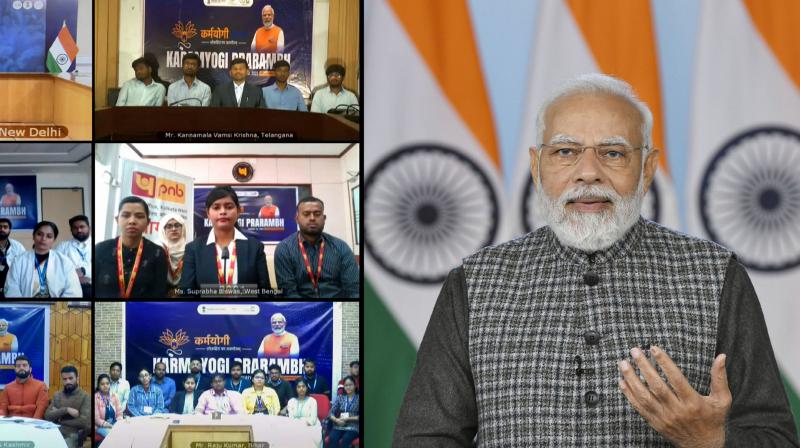 The Prime Minister stated that over the last eight years, a comprehensive approach to infrastructure development in the country has resulted in the creation of lakhs of job opportunities.

Talking about massive investment in the infrastructure sector, the PM emphasised how a newly built road gives rise to employment opportunities along the path.

The Prime Minister mentioned that new markets emerge along the periphery of the new roads or railway lines and make transportation of food grains from the farm to the field a lot easier, while also giving rise to tourism. "All these possibilities gave rise to employment opportunities," he said.

Noting that regular "Rozgar Melas" have become a mark of his government, Mr Modi said that lakhs will get appointed to government jobs in the days to come as Rozgar Melas are being organised regularly in NDA-ruled states and Union territories.

Last year, the Prime Minister had announced the Rozgar Mela drive, which aims to give jobs to 10 lakh people. "Regular Rozgar Melas have become a mark of this government. They show that whatever resolution is taken by this government is realized," he said.

This, the Prime Minister said, goes beyond getting a government job. The candidates are happy that, through a transparent and clear recruitment process, their talent has been recognised.

The Prime Minister further mentioned that in Central jobs, the recruitment process has become more streamlined and time-bound. "The transparency and speed of this recruitment process today characterise every aspect of the function of the government."

Mr Modi recalled the time when even routine promotions were mired in delay and disputes and said that this government has addressed such issues and ensured a transparent process. "Transparent recruitment and promotion generate trust among the youth," he said.

Underlining that it is the beginning of a new journey for those who received their appointment letters today, the Prime Minister highlighted the contributions and partnerships that they will make by being a part of the government machinery in the developmental journey of the nation.

He noted that many new appointees will be interacting with the general public as direct representatives of the government and they will create an impact in their own ways.

Drawing an analogy to the adage in the world of business and industry that the consumer is always right, the Prime Minister remarked that a similar mantra of "the citizen is always right" should be implemented in administration.

"This gives rise to the feeling of service attitude and also strengthens it. When one gets appointed in the government fold, it is referred to as government service and not a job," Mr Modi said.

Referring to the Bharat-Net project, which aims to provide broadband connectivity in every village, the Prime Minister emphasised the new job opportunities that will be created as a result of this connectivity.

"Even those who are not too tech-savvy understand its benefits. This has opened a new area of entrepreneurship by providing online services in villages," he said.

Mr Modi also noted the flourishing startup scene in Tier 2 and Tier 3 cities and said that this success has created a new identity for the youth in the world.

Lauding the journey and efforts of the appointees, the Prime Minister congratulated them for getting the opportunity to serve the people of the country. He exhorted them to remember what brought them here and asked them to keep learning and keep serving. "You have to learn and make yourself capable to take the country forward," the Prime Minister added.

The Prime Minister’s Office (PMO) said that the Rozgar Mela is a step towards the fulfilment of the commitment of the Prime Minister to accord the highest priority to employment generation. The Rozgar Mela is expected to act as a catalyst for further employment generation and provide meaningful opportunities to the youth for their empowerment and participation in national development.