AAP leader Ashutosh said the top bureaucrat has not produced evidence against Prakash Jarwal and Amanatullah Khan, yet they were arrested. 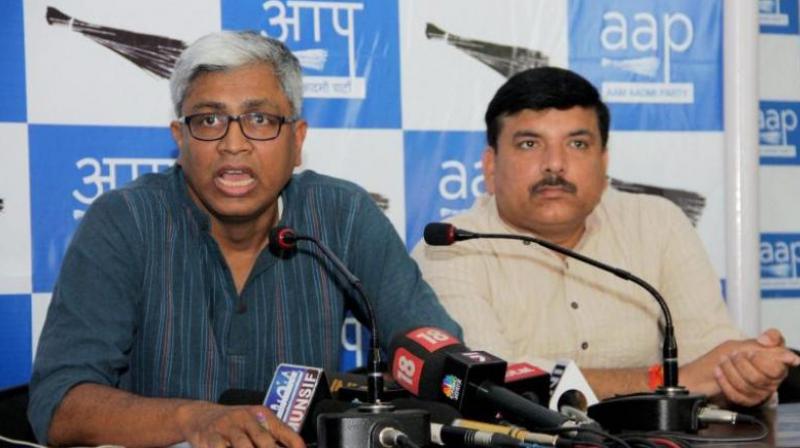 The Aam Aadmi Party on Wednesday cried foul over the arrest of two of its MLAs for allegedly attacking Delhi Chief Secretary Anshu Prakash. (Photo: PTI/File)

New Delhi: The Aam Aadmi Party on Wednesday cried foul over the arrest of two of its MLAs for allegedly attacking Delhi Chief Secretary Anshu Prakash, and claimed the two were being targeted as they belong to the Dalit and minority communities.

Rejecting the charges of assault on the chief secretary, AAP leader Ashutosh said the top bureaucrat has not produced evidence against Prakash Jarwal and Amanatullah Khan, and yet the two lawmakers were arrested. An attempt is being made to "malign" the party's image, he claimed.

Khan was arrested around Wednesday noon, while Jarwal was arrested late Tuesday night for allegedly attacking Prakash at Chief Minister Arvind Kejriwal's residence during an official meeting on Monday night.

Kejriwal's deputy Manish Sisodia and a few other AAP legislators were also present at the meeting.

Senior AAP leader Sanjay Singh said the Delhi Police is yet to take action in another case of assault against Food and Civil Supplies Minister Imran Hussain and Delhi Dialogue Commission's vice-chairman Ashish Khetan at the Delhi Secretariat, despite they providing a video evidence of the attack.

Hussain and Khetan have claimed they were attacked at Delhi Secretariat yesterday and have filed separate complaints with the police.

"Eleven MLAs were present at the meeting at the chief minister's residence and yet only Prakash Jarwal, a Dalit MLA, and Amantullah Khan were arrested. Why?" Ashutosh told reporters.

Jarwal and another AAP MLA, Ajay Dutt, on Tuesday filed a complaint with the Delhi Police and National Commission for Scheduled Castes against Chief Secretary Prakash for using derogatory and casteist remarks. When asked whether the party was seeking to play a minority card, Singh refuted the charge but said Dalits were being targeted in BJP-ruled states.

"Dalits were flogged in Una, a Dalit man was killed for sporting a moustache. There are cases of Pehlu Khan (who was killed by cow vigilantes in Rajasthan in 2017) ," Singh said.

In 2016, Dalits were flogged in Una, leading to state-wide stir in Gujarat. In October last year, a 17-year Dalit boy was killed for allegedly sporting a moustache in Gujarat, a state ruled by the BJP.