I am a Muslim, will remain one, says Hadiya

She has also sought compensation for violation of her fundamental rights. 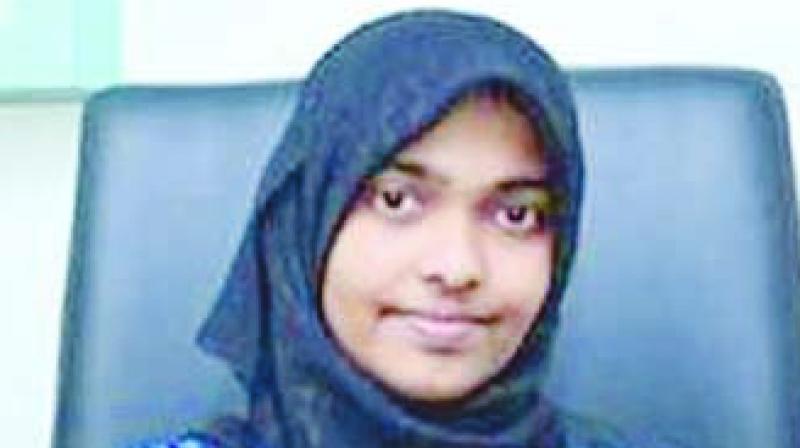 New Delhi: Hadiya alias Akhila Ashokan, the woman at the centre of the controversial Kerala “love jihad” case, made an impassioned appeal to the Supreme Court on Tuesday to allow her to live with her husband Shafin Jahan and asserted that she is a Muslim by choice and “wants to remain one”.

She has also sought compensation for violation of her fundamental rights.

The 24-year-old, who converted to Islam to marry Mr Jahan, has filed an affidavit in the apex court saying, “I embraced the faith/religion of Islam on my choice as per my conscience and on my own free will after studying about Islam and, thereafter, I married Shafin Jahan. I pray that this court may be kind enough to appoint my husband as guardian.”

After months of being confined in her parents‘ home in Kottayam, the apex court in November last year had allowed Hadiya to resume her medical studies at Sivaraj Homeopathy Medical College in Tamil Nadu‘s Salem and lifted restrictions on her meeting her      n Turn to Page 4
husband whom she married in December 2016. Soon after the apex court order a meeting between the two was allowed at the medical college.

In her affidavit, Hadiya has also sought compensation for alleged violation of her fundamental rights.

“The court may pass appropriate orders to take appropriate action in accordance with law against all persons… who tortured me horrendously and mercilessly,” she said.

Hadiya also complained about being kept under surveillance in the medical college.

“Since August 22, 2016, except the period from September 27, 2016, to December 20, 2016, I have been under confinement without the freedom that I am entitled to. Even now I am under police surveillance. I most humbly pray that my entire liberty may kindly be restored,” she said.

“I used to perform namaz (prayer to the almighty) in my room. Once my father happened to see me offering namaz and warned me against Islam saying that it is a religion of terrorism. Thereupon, I was forced to keep my faith in Islam as a secret at least at home,” said Hadiya.

She had repeatedly petitioned the apex court earlier for being allowed to live with her husband after the Kerala high court annulled their marriage in May last year, terming it an instance of “love jihad”. The high court had also made Hadiya’s father her legal guardian.

“Love jihad” is a controversial term coined by fringe Hindutva outfits to harass interfaith couples by claiming that these are forced marriages between Muslim men and Hindu women.

Hadiya told the apex court that after the Kerala high court annulled her marriage, she was subjected to torture.

She complained that she was put under police surveillance and the National Investigation Agency treated her as a terrorist and attempted to mislead her by portraying Mr Jahan as a terrorist.

Her father, retired Army man K.M. Ashokan, had alleged that there was a “well-oiled systematic mechanism” for conversion and Islamic radicalisation. He claimed that Hadiya was recruited by the Islamic State terrorist group by using her husband.