India   All India  21 Feb 2018  Modi not against corruption, he is an instrument of corruption: Rahul
India, All India

Modi not against corruption, he is an instrument of corruption: Rahul

Congress chief Rahul Gandhi, who is on a two-day campaign trail in the north-eastern state, called for a 'BJP-mukt' Meghalaya. 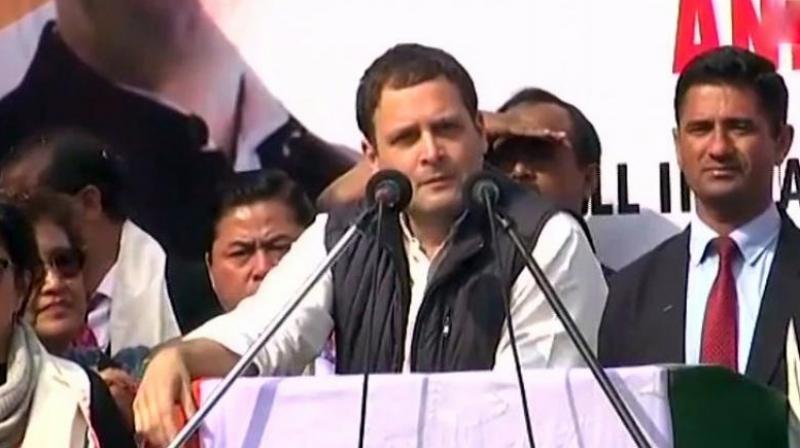 Addressing a public rally in Shillong, Congress president Rahul Gandhi said, 'Just because the BJP can buy a few MLAs, including Congress MLA, you cannot buy the church. You cannot take away our music just because you like Mohan Bhagwat or Modi's songs.' (Photo: ANI | Twitter)

Rahul, who is on a two-day campaign trail in the north-eastern state of Meghalaya, made the remarks after a road-shows at Shillong.

Later addressing a public rally in Shillong, the Congress president said, "Just because the BJP can buy a few MLAs, including Congress MLA, you cannot buy the church. You cannot take away our music just because you like Mohan Bhagwat or Modi's songs."

Rahul in another public rally attacked Narendra Modi over his silence on the PNB bank fraud and the Rafale deal, saying sarcastically that he looked forward to his "sermon" on the issues in his "Mann ki Baat" programme.

Rahul Gandhi also labeled the Prime Minister's programme aired on All India Radio (AIR) a monologue and said the country wants to hear him speak on billionaire diamond jeweller Nirav Modi and the Rafale "scam".

While campaigning for Congress in Meghalaya, Rahul Gandhi also twitted, “Modi Ji, last month you ignored my suggestions for your Mann Ki Baat monologue. Why ask for ideas when in your heart you know what every Indian wants to hear you speak about? ---1. Nirav Modi’s 22,000 Crore Loot and Scoot 2. The 58,000 Crore RAFALE scam. I look forward to your sermon.”

Attacking the saffron party in public rallies, Rahul Gandhi said, “This election is very crucial not just for the people of Meghalaya but the nation as a whole, because the entire country is watching where Meghalaya will go. A BJP victory will encourage the RSS and the BJP to further fragment society. It is time to seriously ponder. The decision of Meghalaya will have an impact all over India.”

Accusing the BJP of dividing society, communities and religion to further its agenda dictated from the RSS headquarters in Nagpur, Rahul said, “Narendra Modi speaks about Vikas (development), but where is it? Look at all the states ruled by the BJP, there is no Vikas, no proper education and no healthcare. They are only instigating one community and religion against each other.”

The Congress president went on accusing, “In Meghalaya MLAs are being lured with money by the BJP. From where are they getting such money to spend? It belongs to the common man, which has been stolen by people like Nirav Modi. The Prime Minister had told the nation he would be a watchman for the people of the country and yet he couldn’t prevent the theft of their hard earned money.”

Rahul Gandhi accused the Modi government of making Aadhaar mandatory for bank accounts and registration of mobile sim cards in order to intensify surveillance on the citizens of the country.

“Modi started Swachh Bharat but failed to clean India. He came up with ‘Make in India’ project but manufacturing continues to take place in countries like China, Malaysia, Vietnam and other nations. Where is the success story?” said the Congress president who also reminded the people about the hardship faced by them during the demonetisation of currency.

The Congress chief also described the National Peoples Party (NPP) led by Conrad Sangma as ‘B’ team of BJP. “The BJP is using the NPP to enter Meghalaya just like they did in Manipur. The BJP agenda is to destroy the culture of Meghalaya and impose their own from Nagpur. But the people of the state are intelligent and will not allow them. We will stand with you. Do not be afraid to tell them in the face about their hidden agenda,” said Rahul while lauding the church in Meghalaya for turning down the Centre's financial package to them in the name of tourism.

Rahul, who on Wednesday addressed a public meeting at Jowai in West Jaintia hills, also took part in a roadshow at Shillong also to woo the electorates. A large number of youth joined the Congress president during his roadshow.

Meanwhile, the ruling Congress Party has strongly objected to the BJP advertisement against Meghalaya Chief Minister Mukul Sangma. It has demanded action against the BJP for publishing a defamatory advertisement.

The BJP had published an advertisement in local dailies showing Mukul Sangma’s photographs with a caption that read - "15 years of Congress rule: Mass exodus of youth from the state for lack of job opportunities.  BJP promises: Provide one job opportunity for every youth."

The Congress working president James S Lyngdoh said it warranted criminal prosecution. He said the publication of such an advertisement-attracted penalty under sections 499 and 500 (defamation) of the IPC.

State’s Chief Electoral Officer FR Kharkongor said he had received a complaint and added that he would look into the issue. Meghalaya is going to polls on February 27.