Red carpet, not red tape to welcome you: Modi at UP Investors Summit- 2018 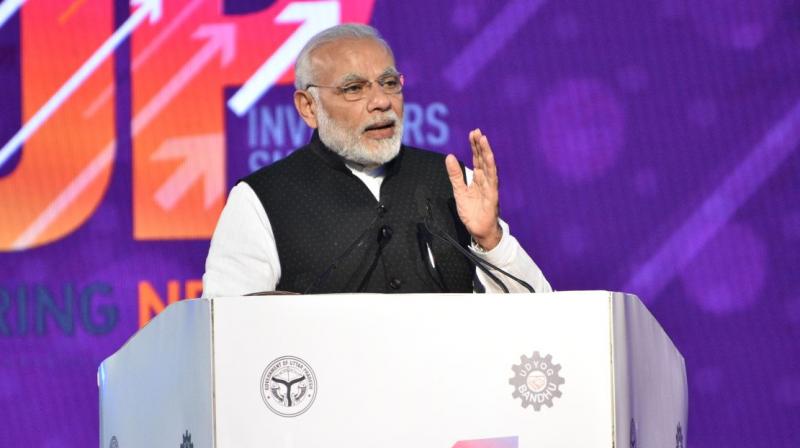 Lucknow: Prime Minister Narendra Modi on Wednesday announced a defence industrial corridor in the Bundelkhand region of Uttar Pradesh in a bid to bring development in one of the most backward regions of the state.

"One of the two defence industrial corridors mentioned in the budget, one is proposed in the Bundelkhand region of the state which will bring an investment of Rs 20,000 crore and generate employment avenues for 2.5 lakh people," the Prime Minister said at the Investors Summit-2018 in Lucknow.

The Prime Minister also stressed on the vast investment potential of the state and said that it requires policy, planning, performance to bring progress and both Chief Minister Yogi Adityanath and people of the state are ready to give a "super hit" performance.

“Uttar Pradesh has values and virtues, but it also needs value addition,” the prime minister said while lauding the new policy ‘One district One Product’ of the Yogi government. He added that the policy could prove to be a game changer.

“Potential coupled with policy, planning, performance can lead to progress in the state,” the Prime Minister said.

“Not red tape, but red carpet will welcome investors in Uttar Pradesh,” he said.

Terming holding of investor's summit in Uttar Pradesh and congregation of industrialists from all over as a sign of a big change, the prime minister said the Yogi government has overcome the previous negativity and shown a ray of hope to people with positive changes.

Modi also announced that international airports will come up in Jewar and Kushinagar.