Mumbai Press Club said in a statement that it has informed the govt, police authorities and sought the arrest of the attackers. 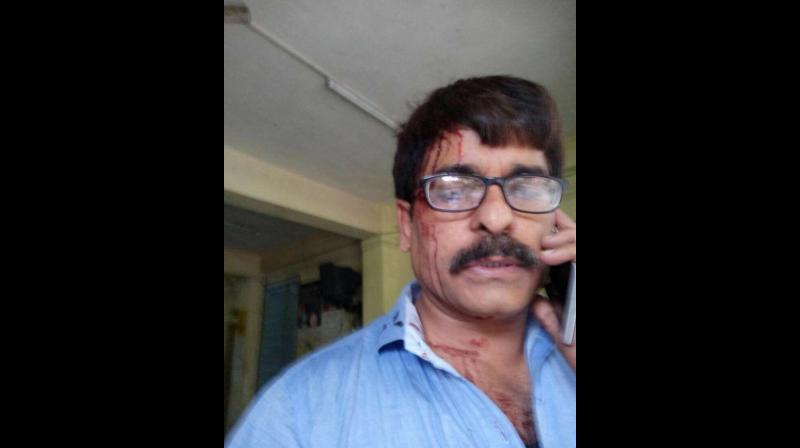 Sudhir Shukla, who works for a Hindi news channel, sustained injuries in the attack that took place between Mira Road and Andheri railway stations. (Photo; Facebook)

Mumbai: A senior TV journalist was allegedly attacked by around eight passengers inside a local train on the Western railway line in Mumbai on Wednesday morning, a railway police official said.

Sudhir Shukla, who works for a Hindi news channel, sustained injuries in the attack that took place between Mira Road and Andheri railway stations, the official informed.

"A group of passengers standing on the foot-board of the local train, tried to stop Shukla from boarding the Andheri-bound train at Mira Road, saying that there was no space inside," a senior Government Railway Police (GRP) official said.

"However, Shukla managed to get inside the train, following which an argument broke out between him and those passengers," the official said.

Soon, the group started assaulting him and even snatched his phone when he tried to click their pictures, he said.

Shukla, who sustained injuries in the incident, was taken to a hospital for treatment. "Once his treatment gets over, we will initiate the process of identifying the accused and a very strong action will be taken against them," Purshottam Karad, DCP of Western Railway GRP, said.

The process of registering a case in this connection was underway at the GRP unit in Andheri, he added.

Condemning the incident, the Mumbai Press Club said in a statement that it has informed the government and police authorities and sought the arrest of the attackers. "These commuters are known for blocking others from travelling on trains in peak hours. The violence goes unchecked by the police despite repeated incidents," the Press Club said.