India   All India  21 Feb 2019  Maharashtra farmers begin their agitation again to press for their demands
India, All India

Maharashtra farmers begin their agitation again to press for their demands

8-day farmers protest in Maharashtra delayed due to police intervention. 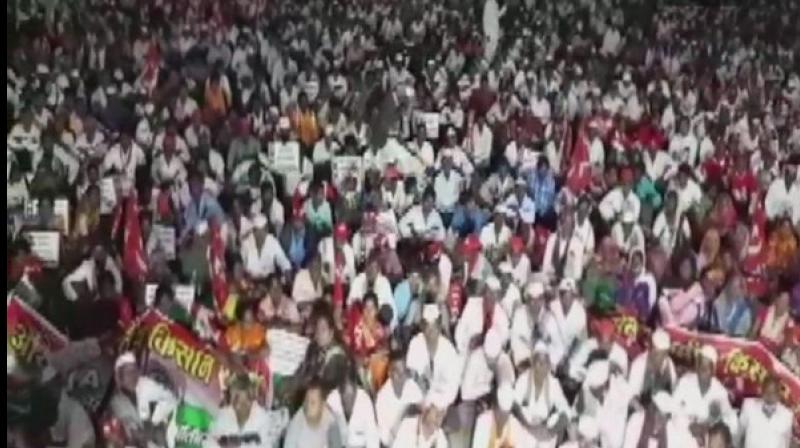 The farmers’ have agitated second time in the last 12 months against what they termed as the “betrayal” of peasants by the BJP governments at the state and centre. (Photo: ANI)

Mumbai: After eleven months, thousands of Maharashtra farmers on Thursday began their protest from Nashik to Mumbai to push for their unfulfilled demands by the state government.
The farmers’ demands include loan waiver, minimum support price, provision of pension, irrigation facilities and land rights.
The 8-day long march is organised by the All India Kisan Sabha (AIKS).
Farmers will cover the distance of over 180 kilometres between Nashik to Mumbai on foot and are expected to reach Mumbai on February 27.
The march towards Mantralaya, Mumbai initially was about to commence from Nashik on Wednesday evening, however, due to the police intervention the protest got delayed.
In a three hour meeting between Maharashtra Water Resources Minister Girish Mahajan and AIKS representatives in Nashik on February 20 night, the minister assured to fulfil the demands of the farmers.
However, the farmers want Maharashtra Chief Minister Devendra Fadnavis to take action immediately.
The farmers’ have agitated for the second time in last 12 months against what they termed as the “betrayal” of peasants by the BJP governments at the state and centre.
In March 2018, the All India Kisan Sabha had organised a long protest march, led by over 30,000 farmers, from Nashik to Mumbai.