The Ordinance will protect the rights of married Muslim women and deter the practice of divorce by triple talaq, that is, talaq –e –biddat. 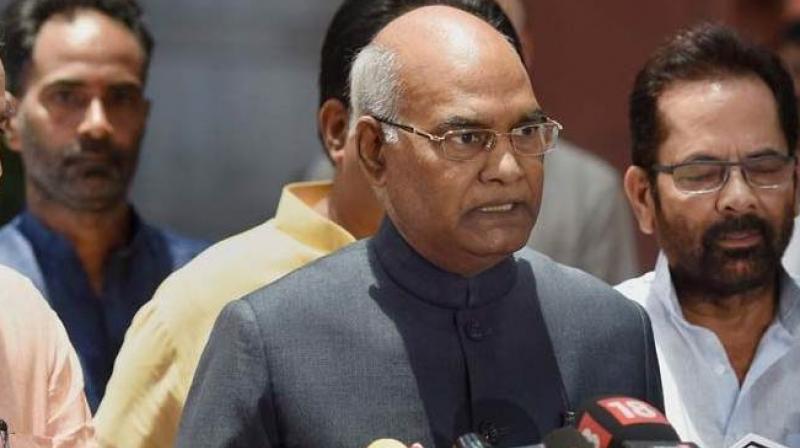 The Indian Medical Council (Amendment) Second Ordinance, 2019 has been promulgated to give continued effect to the work already done by the Board of Governors (BOG) as per the provisions of earlier Ordinance. (Photo: File)

New Delhi: President Ram Nath Kovind on Thursday promulgated four Ordinances including the Muslim Women (Protection of Rights on Marriage) Second Ordinance, 2019, which declares the practice of instant triple talaq to be void and illegal and also to make it an offence punishable with imprisonment up to three years and a fine.

The Ordinance will protect the rights of married Muslim women and deter the practice of divorce by triple talaq, that is, talaq –e –biddat. It also provides for payment of subsistence allowance and custody of minor children.

The Indian Medical Council (Amendment) Second Ordinance, 2019 has been promulgated to give continued effect to the work already done by the Board of Governors (BOG) as per the provisions of earlier Ordinance.

“This Ordinance, inter alia, enables the Board of Governors appointed in supersession of the Medical Council of India (MCI) to continue to exercise the powers of MCI for a period of two years or till the Council is reconstituted, whichever is earlier so as to ensure transparency, accountability and quality in the governance of medical education in the country,” adds the statement.

In pursuance of the Central government’s objective of providing Ease of Doing Business to Law abiding corporate while simultaneously strengthening the corporate governance and compliance framework enshrined in the Companies Act, 2013, the Companies (Amendment) Second Ordinance, 2019 has been promulgated with a view, to empower the Central government to allow certain companies to have a different financial year instead of as determined by the Tribunal.

This Ordinance, inter alia, addresses the need to impose civil liability for technical and procedural defaults of a minor nature and to plug the corporate governance and enforcement framework, through re-categorisation of 16 minor offences as civil defaults which will de-clog special courts, transfer of certain routine functions such as permitting conversion of a public company into a private company from NCLT to the Central government, making non-maintenance of registered office and non-reporting of commencement of business as grounds for striking of from register of companies; and breach of ceiling on Directorships being made a ground for disqualification, enhancing the pecuniary jurisdiction of Regional Director’s for compounding offences under the Companies Act with a view to unburdening the NCLT of routine functions etc.

The Banning of Unregulated Deposit Schemes Ordinance, 2019 has been promulgated to have central legislation to tackle the menace of illicit deposits taking activities in the country. Presently, non-banking entities are allowed to raise deposits from the public under the provisions of various statutes enacted by the Central government and State governments.

However, the regulatory framework for deposit-taking activity in the country is not seamless. Despite such diverse regulatory framework, schemes and arrangements leading to an unauthorised collection of money and deposits fraudulently by inducing the public to invest in uncertain schemes promising high returns or other benefits are still operating in the society.

“This Ordinance, therefore, ensures a comprehensive ban on unregulated deposit-taking activity and for its effective enforcement. It aims to prevent such unregulated deposit schemes or arrangements at their inception and at the same time makes soliciting, inviting or accepting deposits pursuant to an unregulated deposited scheme as a punishable offence,” said the statement.