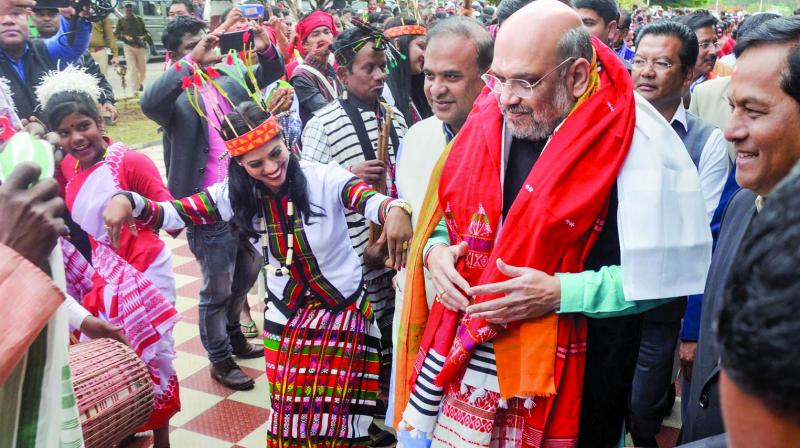 Guwahati: China on Thursday objected to home minister Amit Shah’s visit to the frontier state of Arunachal Pradesh, claiming that the visit had violated its territorial sovereignty and “sabotaged” mutual trust with India.

The Union home minister was in Itanagar on Thursday where he attended the celebrations ob-serving the 34th Statehood Day of Arunachal Pradesh and launched a number of development projects planned for all round development of the state. Ignoring frequent objections of China, Mr Shah also announced that work on constructing an airport for Arunachal Pradesh has also started.

“China’s position on the eastern sector of the China-India boundary, or the southern part of China’s Tibet region, is consistent and clear,” Chinese foreign ministry spoksperson Geng Shuang said, responding to a question about the visit from the Chinese state media.

“The Chinese government has never recognised the so-called ‘Arunachal Pradesh’ and is firmly opposed to the Indian politician’s visit to the southern part of China’s Tibet region as it violated China’s territorial sovereignty, undermined stability of the border area, sabotaged political mutual trust, and violated relevant bilateral agreement,” Geng said at the online ministry briefing at Beijing.

Earlier, Mr Shah while addressing the gathering at Itanagar assured the people of the frontier state that the government is committed to protecting its culture and heritage.

Asserting that Article 371 would remain intact and it has no connection to the abrogation of Article 370, Mr Shah said that Arunachal Pradesh is the only place where people greet each other by saying “Jai Hind” and this visible patriotism is an inspiration for the nation. He congratulated the state on the completion of 33 years of statehood and stated that the Industrial and Invest-ment Policy 2020 is a welcome move which will enable the state to contribute to the nation’s dream of being a 5 trillion economy.

Mr Shah while lauding the cultural heritage of the Northeast said that the country’s development is incomplete without the development of the northeast. He assured that the protection of the culture of the tribes is responsibility of the government and the central government is committed to this ideal.

He said that before 2014, the region was only linked to India geographically, but now the region is connected to the country by heart and emotion with the 27 tribes and 130 sub-tribes of the state having a special position in the connect.

While enumerating all development and social initiatives undertaken by the BJP-government in the last six years such as the Bodo Agreement, Bru-Reang settlement, Bogibeel bridge, rail, road and air connectivity and other infrastructure projects, the home minister assured citizens that the capitals of the Northeast would be well connected by road and air very soon.

He also said that the region was earlier known for terrorism, infiltration, corruption and other ailments but now it is known for good governance, infrastructure, Act East and Sports while in the next five years the Modi government shall ensure that the region would be a problem-free one.

The home minister also inaugurated the Aruna-chal Pradesh Industrial and Investment policy and launched several projects at IG Park in Itanagar on Thursday during the function in presence of governor of Arunachal Pradesh, Brig. Dr. B.D. Mishra among other dignitaries.