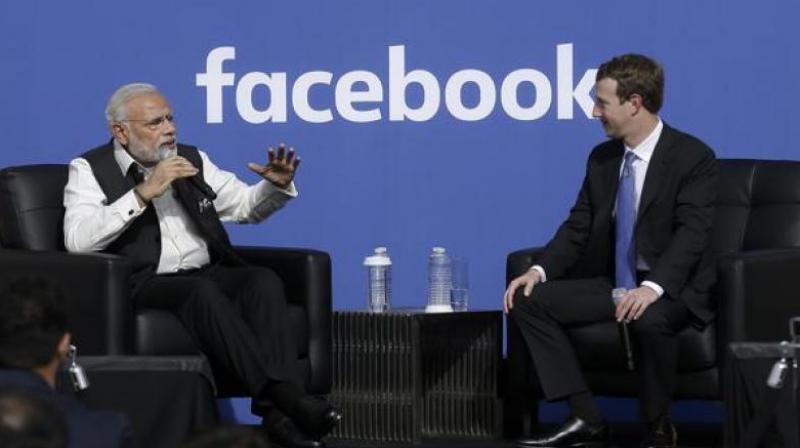 New Delhi: The Congress on Wednesday while denying links with the data analysis firm Cambridge Analytica, said that Narendra Modi was the only Prime Minister to have visited Facebook's office in Silicon Valley.

Congress spokesperson Randeep Surjewala accused the Prime Minister of trying to portray Facebook founder Mark Zuckerberg as a villain after coming back to India.

"In Facebook headquarters, he (PM Modi) said Mark Zuckerberg is the best innovator but is trying to prove him a villain after coming back to India," Surjewala said.

The Congress denied links with data analysis firm, accused in Facebook data privacy scandal and said that BJP and JD(U) used its services in 2010.

"Indian National Congress (INC) or the Congress president (Rahul Gandhi) has never used or never hired the services of a company called Cambridge Analytica. It is a fake agenda and white lie being dished out by Union Law Minister Ravi Shankar Prasad," Surjewala had said.

Ravi Shankar had said the agency roped in by Congress to run their 2019 campaign and termed as their 'Brahmastra' in certain section of media, is accused of using bribes, sex workers to entrap politicians and stealing data from Facebook.

Following Congress' reaction, BJP spokesperson Sambit Patra said that the government would investigate the matter and that the truth will be brought to the fore.

He also asked Congress President Rahul Gandhi to come forward and answer the questions which have been put forth to him.

Stating that the BJP has nothing to hide, Patra said in 2014 BJP campaign, 1,000 websites and 10,000 individuals had sought credit, adding that the named company had downed its website after  allegation that it was carrying the name of BJP.

Meanwhile, Facebook is having a tough time after Cambridge Analytica was accused of harvesting data of up to 50 million Facebook users without permission. It has allegedly used the data to help politicians, including US President Donald Trump and the Brexit campaign.