It is my sincere wish that the Commonwealth will continue to offer stability and continuity for future generations.— Queen Elizabeth II 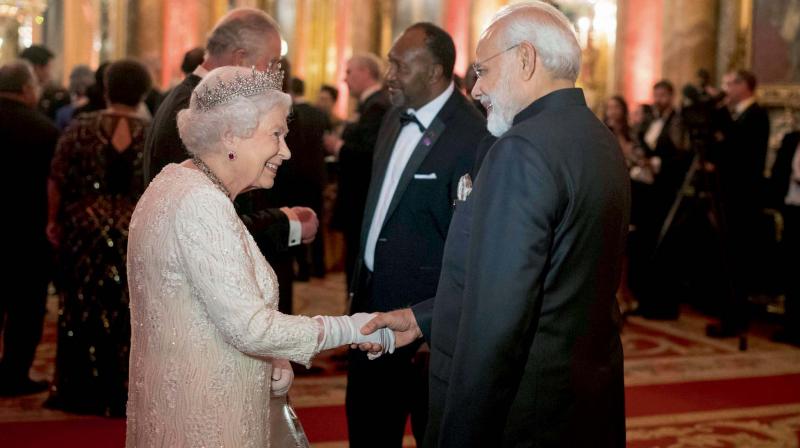 Britain’s Queen Elizabeth II greets Prime Minister Narendra Modi in the Blue Drawing Room at Buckingham Palace in London on Thursday as the Queen hosts a dinner during the Commonwealth heads of government meeting. (Photo: AP)

The closed-door meetings comprise the informal segment of CHOGM, where the leaders meet without any pre-set agenda and without the presence of their close aides.

South African President Cyril Ramaphosa will be absent from the group of 53 heads of government as he had to rush back to Cape Town after violent clashed broke out in the country.

The issue of succession is expected to be the dominant at the retreat at the grand Waterloo Chamber of the Castle, one of the homes of Queen Elizabeth II — the Head of the Commonwealth.

She expressed her “sincere wish” that her son and heir Prince Charles step into her shoes in her opening address for CHOGM on Thursday and a general consensus see-ms to be building around the 69-year-old royal.

“India has no objection to Prince Charles as the next Head because he has worked hard for the institution. However, we are also clear that there should be no institutionalisation of the post,” a senior Indian official said.

The 91-year-old mona-rch, who has ruled out long-haul travel, is unlikely to attend any future Commonwealth summits in far flung member-countries and is keen to pass on the baton to the 69-year-old Prince of Wales.

“It is my sincere wish that the Commonwealth will continue to offer stability and continuity for future generations — and will decide that one day the Prince of Wales will carry on the important work started by my father (King George VI) in 1949,” she had in her speech at Buckingham Palace.

The Commonwealth is one of the world’s oldest political association of states, with its roots in the British Empire when some countries were ruled directly or indirectly by Britain. Independent countries from Africa, the Americas, Asia, Europe and the Pacific have joined the Commonwealth over the years, with the last two members to join — Rwanda and Mozambique — having no historical ties to the Empire.

Some experts have argued that the end of the Que-en’s term as head of the organisation is an opportunity for the non-hereditary post to be passed on to a non-royal in order to distance the group from its colonial past.