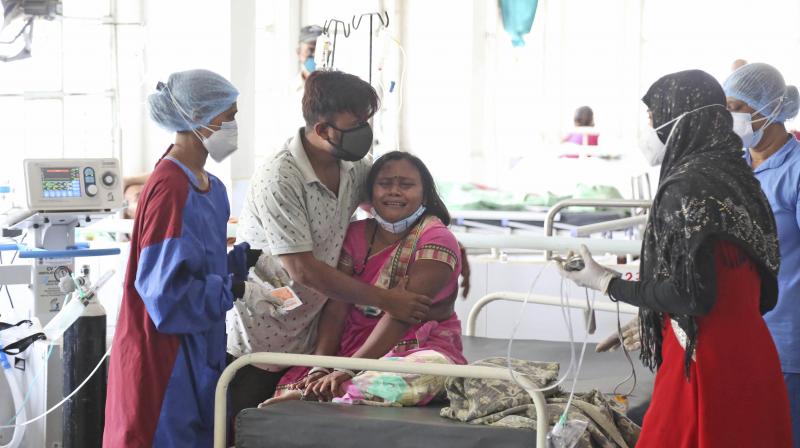 A woman cries after her husband died of a leakage in the oxygen plant of a hospital in Nashik. (Photo: AP)

Mumbai: In a shocking incident, 24 Covid positive patients died at a municipal hospital in Nashik on Wednesday as oxygen supply was interrupted following massive leakage from an oxygen tanker. The state government ordered a high-level inquiry into it. Chief minister Uddhav Thackeray announced Rs 5 lakh compensation each to the heirs of the deceased.

According to the sources, the tragic incident took place at around 12 pm, when substantial leakage from an oxygen tank caused disruption in oxygen supply for close to 30 minutes, which allegedly caused the deaths of several patients who were on oxygen support. A fire brigade team was called to the incident spot to contain the leak.

All the victims were on ventilators and in need of constant oxygen supply. Zakir Hussain Hospital is a Covid-dedicated facility. Around 150 patients were either oxygen-dependent or on ventilators.

Panic struck patients and their family members as the oxygen supply was stopped. Heart-wrenching visuals showed families trying to help the patients as they gasped for breath.

Visuals showed gas leaking from the tanker outside the hospital and dense white fumes covering the area rapidly.

R.V. Game, Divisional Commissioner of Nashik Division said that after the incident, relatives and others started entering the ward, leading to chaos. “This led to delay in restoring the situation. The entire staff is under shock,” he said.

Mr Game confirmed that a high-level committee has been constituted with five members including deputy director health, principal polytechnic and superintendent engineer of Nashik Municipal Corporation. The committee would be headed by him.

Terming the Nashik mishap ‘shocking’, Chief Minister Uddhav Thackeray said that he does not have words to express his grief.  “The oxygen leakage that led to the death of 22 people is a shocking incident. I cannot express my grief in words. Such incidents are devastating, especially when we are trying hard to save every Covid patient,” he said adding that nobody should do politics on Nashik incident as the entire Maharashtra is moaning.

Maharashtra health minister Rajesh Tope said that the valve was leaked resulting in the dropping the pressure of the supply of oxygen. Prime Minister Narendra Modi tweeted his condolences to the families of the victims. “The tragedy at a hospital in Nashik because of oxygen tank leakage is heart-wrenching. Anguished by the loss of lives due to it. Condolences to the bereaved families in this sad hour,”  he tweeted.

Congress party blamed BJP, which controls the Nashik municipal corporation, for the tragedy. Maharashtra Congress spokesman Sachin Sawant said, “We demand inquiry into the tragedy at Nasik's Zakir Hussain Hospital. Anyone who is responsible must be brought to books. The hospital is managed by Nasik municipal corporation which is under BJP rule. BJP must take the responsibility.”