11 coaches of Mumbai-Lucknow express derail at Unnao, UP

No casualties were reported though some passengers received minor injuries, an official said. 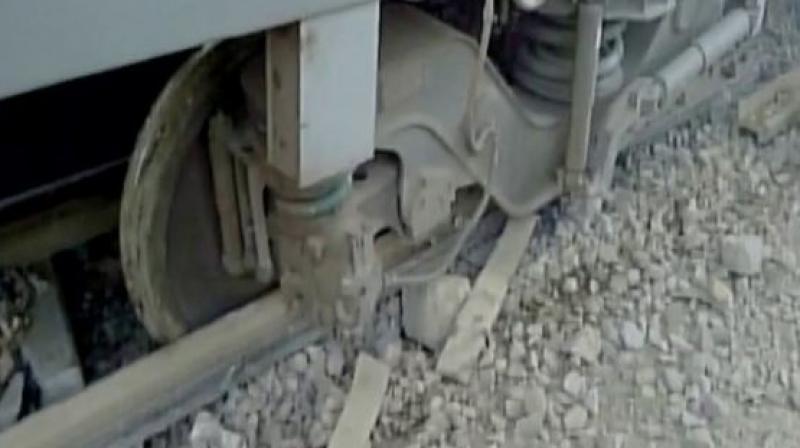 At around 2.00 PM on Sunday, 11 coaches of the Mumbai-Lucknow Lokmanya Tilak Express derailed when it arrived at platform number 3 of Unnao station. (Photo: ANI/Twitter)

Unnao: Eleven coaches of the Mumbai-Lucknow Lokmanya Tilak Express derailed here on Sunday, but fortunately a tragedy was averted as the train was moving at a slow pace, the police said.

No casualties were reported though some passengers received minor injuries, an official said.

"At around 2.00 PM on Sunday, 11 coaches of the Mumbai-Lucknow Lokmanya Tilak Express derailed when it arrived at platform number 3 of Unnao station. Since the train's speed was slow, a bigger tragedy has been averted. All the passengers are safe," Superintendent of Police, Unnao, Neha Pandey said.

She said the passengers had been provided food and water and alternate arrangements were being made to send them to their destinations.

The police official added that a team of the Uttar Pradesh Anti-Terrorist Squad (ATS) was expected to arrive to examine the spot.

"Photography and videography of the spot is being done. A team of UP ATS is likely to arrive at the spot from Lucknow," Pandey said.

Some passengers however sustained minor injuries, as they tried to come out of the train. The incident came as a shock to them, a police official said.

The railway track has also been damaged due to the derailment.

Senior officials of the Railway and district administration also reached the spot.