India   All India  21 May 2017  Tension prevails in Jharkhand village where mob lynched 4
India, All India

In reaction to WhatsApp rumours, local tribal leaders resorted to bows, arrows for guarding children and villages from ‘child lifters’. 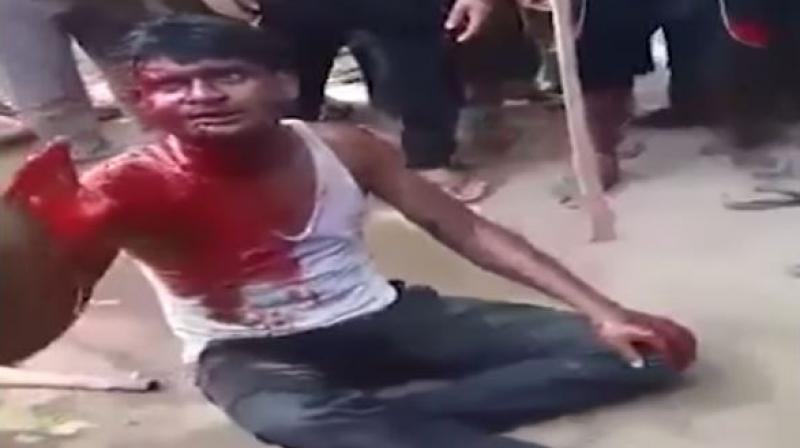 One among the four lynched on Thursday begs for his life as villagers thrash him on the assumption of he being a 'child lifter', in Seraikela Kharswan district. (Photo: YouTube videograb)

Jamshedpur: Parents in four areas of Jamshedpur, especially places like Seraikela-Kharswan district, stopped sending their children to schools or even outdoors under the threat of ‘child lifters’.

According to a report in The Indian Express, the rumours of ‘child lifters’ went viral on WhatsApp with pictures of dead children and text messages detailing their lifting. The local authorities and administration did not pay heed until Thursday night’s incident claimed seven lives in a tussle between the tribals and non-tribals.

The messages widely circulated on WhatsApp had information about sedatives seized from the miscreants, injections and handkerchiefs used to administer them on children, and about how they dress in black speaking ‘various languages’. To keep children safe, local tribal leaders resorted to bows and arrows for guarding villages from ‘child lifters’.

In two separate incidents, four persons were lynched on Thursday by villagers suspecting them to be child lifters in Seraikela Kharswan district, while three others of another community were also beaten to death on the same suspicion at Nagadih in East Singhbhum district the same day.

Protest against lynching of four persons intensified on Saturday and the police had to fire in the air to disperse a mob, while prohibitory orders under Section 144 were imposed in four areas in Jamshedpur for Saturday night.

Police dispersed a mob that blocked roads in Mango area, demanding arrest of culprits involved in the lynching of four persons of a community at Rajnagar in Seraikela-Kharswan district on Thursday.

"Police fired in the air and hurled tear gas shells to disperse the mob in Mango. However, the situation is under control now and adequate force have been deployed in the area," Deputy Commissioner of East Singhbhum district Amit Kumar said.

Besides Mango, members of that community also put up a road blockade in Dhatkidih under Bistupur police station area.

People had blocked Bistupur station road on Friday also, demanding arrest of those involved in the lynching. Meanwhile, prohibitory orders under Section 144 CrPC has been promulgated in four police station areas of the steel city in Jamshedpur in view of the prevailing tension.

The prohibitory order would be in effect between 10 pm on Saturday and 6 am on Sunday in Mango, Azadnagar, Olidih and MGM police station limits as a precautionary measure, Sub-divisional Officer (Dhalbhum), Manoj Ranjan said.

"We have deployed adequate force including Rapid Action Force to maintain law and order," he said. Meanwhile, Congress attacked Raghuvar Das government on the issue and alleged that ‘jungle raj’ was prevailing in the state.

"Beginning from Jamshedpur, Seraikela, Dhanbad and Bokaro, the rumours of child lifting has been gaining ground for the last seven days, which led to lynching," AICC spokesperson Ajoy Kumar said in a statement.

The chief minister on Friday announced Rs 2 lakh compensation to the family members of each of the deceased. He had also condemned the incidents and directed the officials to identify those who were spreading rumours of child lifters and taking law into their own hands.