The expedition, christened 'Navika Sagar Parikrama', was flagged off from the INS Mandovi boat pool here on September 10, 2017. 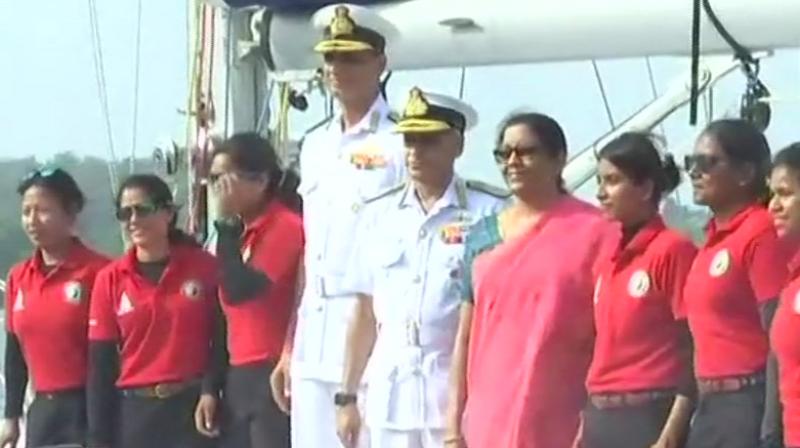 Panaji: Defence Minister Nirmala Sitharaman and Navy chief Admiral Sunil Lanba on Monday welcomed the Indian Navy's six-member all-women crew who arrived in Panaji after circumnavigating the globe in over eight months on board the naval vessel INSV Tarini.

The expedition, christened 'Navika Sagar Parikrama', was flagged off from the INS Mandovi boat pool in Goa on September 10, 2017. Led by Lieutenant Commander Vartika Joshi, the crew had Lt Commanders Pratibha Jamwal and Swati P, and Lieutenants Aishwarya Boddapati, S Vijaya Devi and Payal Gupta as other members. They completed the feat in the 55-foot sailing vessel, INSV Tarini, which was inducted into the Indian Navy on February 18, 2017.

It was the first-ever Indian circumnavigation of the globe by an all-women crew, the Navy said. The six women officers trained for the project under Captain Dilip Donde, the first Indian to solo-circumnavigate the globe from August 19, 2009 to May 19, 2010 onboard the Indian-built vessel INSV Mhadei, a Navy official said.

"The crew covered 21,600 nautical miles in the Indian-built sailing vessel INSV Tarini that visited five countries and crossed the Equator twice. It sailed across four continents and three oceans, and passed south of the three Great Capes - Leeuwin, Horn and Good Hope," the spokesperson said.