The ruling BJP not only managed to set the agenda on the emotive issue but also forced the Opposition on the back foot before 2019 polls. 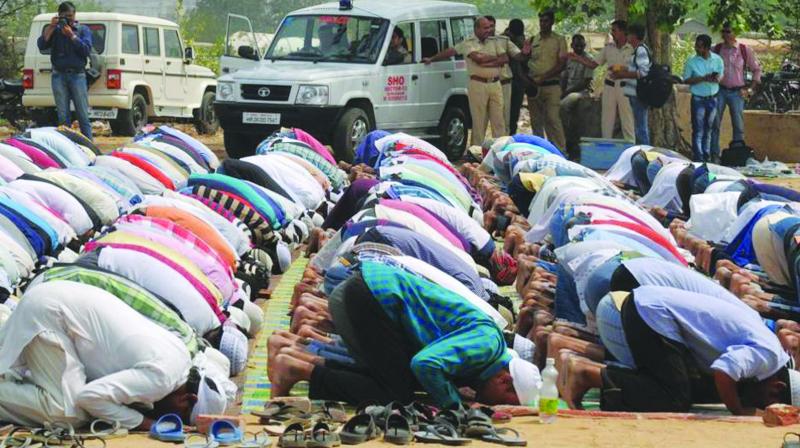 Muslim devotees offering namaz at a public place under police protection in Gurgaon in Haryana.

Observers feel Muslims in Haryana are disillusioned with the Congress and INLD for playing the soft Hindutva card and remaining virtually silent on the BJP leaders’ remarks seeking curbs on offering prayers in public spaces.

Chandigarh: Haryana chief minister Manohar Lal Khattar’s recent statement that Muslims should offer namaz in mosques rather than in open spaces, is being seen by many as an attempt by the ruling BJP to polarise electorate even as the Opposition parties are cautious in taking up sides with the minority community as part of their political strategy in the state which is heading for Assembly elections in 2019.

Soon after Mr Khattar defended the right-wing groups that openly declared that they would not allow namaz to be offered in any open place in Gurgaon, he tactically directed the Haryana Waqf Board to allow Muslims to offer the Friday namaz on its properties. About 20 such properties have already been identified but some of them are encroached.

Jagmati Sangwan, president of All India Democratic Women Association AIDWA, feels that the state should tread carefully when dealing with religious matters. “The utterances made by Mr Khattar are very irresponsible. All religions should be treated equally by the state, when people of one religion can do jagrans on the roads and play loud music. The state should not be concerned about someone quietly offering namaz. There seems to be an agenda behind all this at the behest of RSS and its umbrella organisations. The namaz was being offered at these places from very long time and nobody objected to it.”

Amid the controversy, political observers see a n attempt by the ruling BJP to appeaseHindu voters but they are  surprised by the cautious or rather muted reaction of the Opposition Congress and INLD on the issue. “The ruling BJP has not only managed to set the agenda on the emotive issue but also forced the Opposition on the back foot before the 2019 polls,” said a professor of political science in Chandigarh who refused to be identified.

Political observers feel that the Muslim population in the state is disillusioned with both the Oppostion parties for playing the soft Hindutva card on not only this issue but on issues like cow vigilantism and people being targeted for allegedly selling and consuming beef.

They point out that Opposition parties have neither shown any foresight nor developed a political strategy to counter the agenda of the BJP and other Hindutva groups on these issues.

The controversy began about four weeks ago when a group of youths objected to the namaz being offered in an open space in Gurgaon's Wazirabad area. Later, a few Hindutva organisations began their protest against offering namaz in the open.

Mr Khattar virtually angered Muslims by claiming, “Our point of view is that namaz should be offered in the precincts of religious places like mosques and Eidgahs, and if there is shortage of place for offering namaz, it should be done at private places.”

He said that instances of namaz being offered at public places have been “increasing”. The Friday prayers, he said, should be offered at designated places because certain individuals or departments may have objections to it being done in public areas.

“Till the time nobody raises objections (to namaz being offered at public places), it is okay… but if there are objections from any department or any individual, then we have to be careful,” the chief minister said.

Mr Khattar’s Cabinet minister Anil Vij also sparked a row by saying that “offering prayers at a place with the intention of grabbing land is wrong and will not be allowed”.