India   All India  21 May 2018  Kumaraswamy meets Rahul, Sonia in Delhi, invites them for swearing-in
India, All India

Kumaraswamy meets Rahul, Sonia in Delhi, invites them for swearing-in

Kumaraswamy said both Rahul and Sonia Gandhi have agreed to be present at his oath taking ceremony. 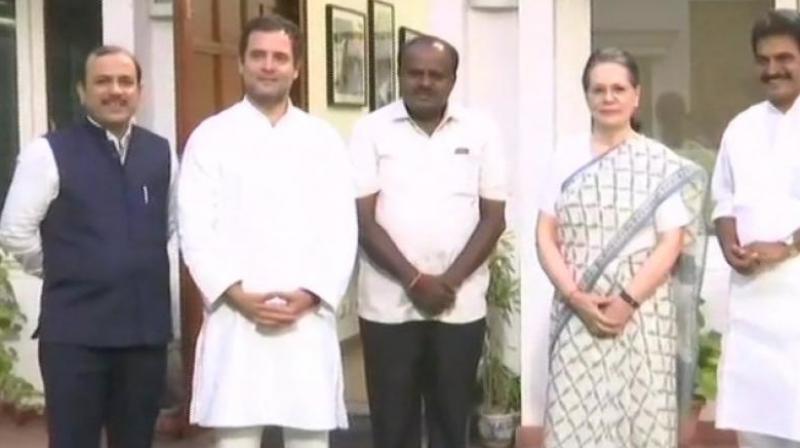 Speaking to the media after the meeting, Kumaraswamy said, "Rahul Ji cleared the modalities to be done, he has given permission to Karnataka General Secy K C Venugopal to discuss all those matters and finalise everything. Local leaders and he will sit together tomorrow to finalise things.”

"I wanted to show my respect and regards to Gandhi family. That's why I came here. I requested them further presence in oath taking ceremony. Both of them agreed to be present at the oath taking ceremony," Kumaraswamy said on his meeting with the Gandhis.

K C Venugopal, AICC in-charge of Karnataka, was also present at the meeting.

According to sources, Congress has mooted two deputy chief ministers for the numerically strong party in order to strike a balance with the JD(S) but the regional party is believed to be not in favour of this proposal.

KPCC chief G Parameshwara is among the frontrunners for the deputy chief minister's post.

Kumaraswamy, who will be sworn in as chief minister on Wednesday for the second time in 12 years, flew into the capital on Monday afternoon and began his engagements with a meeting with pre-poll ally BSP chief Mayawati.

BSP bagged 1 seat. During his 20-minute meeting with Sonia and Rahul, Kumaraswamy is understood to have discussed the nitty-gritty of Cabinet formation on the number of ministerial berths the Congress and the JD(S) would get.

"There is no bargain. We will cordially work out things. We must work together. I am here to take their (Congress leaders) advice," said Kumaraswamy when asked by the media ahead of the meeting how the Congress and the JD(S) will address the issue of ministry formation.

"We are going to give a stable government. All these issues are not yet discussed. We have not discussed any future course of action,” Kumaraswamy said.

Kumaraswamy is expected to take the floor test within 24 hours after being sworn in.

Both Congress and JD(S) MLAs will remain confined to their hotels till the floor test, according to reports from Bengaluru.

Kumaraswamy was invited by Governor Vajubhai Vala to take the reins of power after the three-day BJP government collapsed on Saturday with B S Yeddyurappa, unable to muster the required number for a majority, stepping down as the chief minister without facing the floor test in the state assembly.

The May 12 Karnataka Assembly elections threw up a hung verdict with the BJP emerging as the single largest party with 104 seats. The Congress was next with 78 and the JD(S) followed with 38. The BSP has one MLA and two seats went to Independents.