India   All India  21 May 2019  To truly develop India, Modi 2.0 needs to focus on strengthening institutions
India, All India

These elections have probably witnessed the highest levels of tongue-lashings and verbal attacks. 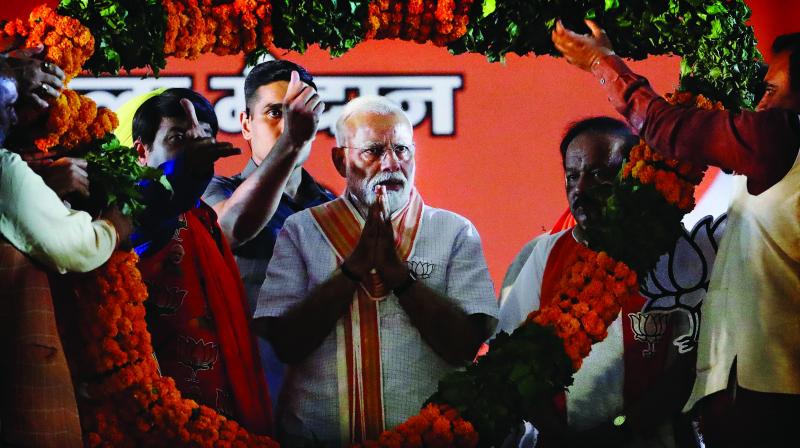 The 2019 Indian general elections have been the most hotly contested elections ever in India’s history. Never before have the Opposition parties come together as they did this time around with a single-point agenda, namely, to oust the Modi-Shah duo. Why? Because they believe that Modi-Shah duo is too dangerous for the country and its people. Is it so or is the duo too dangerous for the Opposition?

These elections have probably witnessed the highest levels of tongue-lashings and verbal attacks. The kind of obnoxious campaign unleashed during electioneering has made calling somebody “intolerant” or “arrogant” sound polite! Many political commentators have lamented at the quality of the election campaign this time around. The Bharatiya Janata Party (BJP) is being blamed for it. Some well-known political personalities have said that Prime Minister Narendra Modi has lowered the dignity of the Prime Minister’s Office, Mr Modi has “stooped low” and has used language that was unbecoming of a Prime Minister. It is important to bear in mind that the lowering of narrative is the result of a sequential game between the parties, in which the Opposition is equally to be blamed.

That aside, it may be true that politics in India has reached all-time low. The point to remember is that there are no minimum standards or ethics when it comes to political survival. All is fair not just in love and war but also in politics. If arch-rival parties can come together, abandoning their core ideologies, why blame only Mr Modi or his party for doing what they did. All parties practice opportunism. Only this time around, the elections saw more hatred and more aggression. Some of this is quite natural as the Modi government has altered politics in India — it’s no longer business as usual. Incentives facing politicians and political parties have changed in India. The Opposition is gazing into the unknown future — if the Modi-Shah party were to come back to power. If that were to happen (and most exit polls are actually pointing towards it!), some politicians and parties may lose their raison detre of being in politics or fighting elections.

Tony Blair — former Prime Minister of the United Kingdom — once said that the challenge political leaders often face is that the skills they need to come to power are quite different from the skills they need once they are in power. Indeed, parties and politicians will do and say all kinds of things during elections in their bid to come to power. But once the election dust settles and the results are announced, all those things will fall behind and the real game will begin.

GAUGE A PARTY BY ITS PERFORMANCE
Once a new government is in place, subject it to the highest standards of decision-taking and accountability. What ultimately matters is: what does a government do during much of its term in power? This is where the Modi government’s performance on the development front is not as bleak as the Opposition would have us believe. On the development front, the Modi government has actually made some significant progress across different sectors: infrastructure (e.g. highways, bridges, airports and railways), energy, technology, the financial sector (e.g. bankruptcy laws), real estate and so forth. Even in social sectors such as health, nutrition and social protection, the government has made some significant strides. It has pursued the inclusion agenda too by focusing on the most backward (aspirational) districts, the Northeastern region as well as initiating special programs targeted at specific socio-economic groups.

Nonetheless, the Modi government has had its hits and misses, which is only to be expected from any government that comes with a full majority in the Lok Sabha and takes bold decisions. And bold decisions mostly have some associated costs too. You can’t make an omelette without breaking eggs, can you? If you want to achieve something you have to tolerate some negative effects too. Further, the development needs of the country are huge. Not everything will get addressed quickly. There will be sections of society that will remain unhappy but that is in the nature of development’s priority setting and processes.

TOWARDS A BETTER OUTCOME
Anybody who has seen Mr Modi in action in the last five years would most likely agree that he is passionate about India’s development and brings lots of energy to the role of Prime Minister. This kind of energy and enthusiasm is hard to find in any leader from any other political camp. It is also true that many people don’t like the political side of the BJP, particularly the tricks and strategies it deploys to get its own way, to disarm the Opposition, to rob public institutions of their autonomy and so forth. The not-so-good political side of the BJP has made some people overlook or discount its strengths on the development side.

How could the country tap into the leadership of Mr Modi, who is so passionate about India’s development, and, at the same time, control the downside of the BJP’s politics? Well, if the Modi government needed the support of regional parties to return to power, it would have kept a check on the BJP’s politics too. Alas, this is unlikely to be the case. Most exit polls have predicted an easy majority for BJP-led National Democratic Alliance. If this prediction comes true, the only other way is a self-realisation on the part of BJP that building strong public institutions, including a strong Opposition is very much a part of the country’s development process. The sooner this self-realisation, the better!