India   All India  21 May 2020  Cyclone Amphan leaves behind a trail of destruction in West Bengal, Odisha
India, All India

Cyclone Amphan leaves behind a trail of destruction in West Bengal, Odisha

Though weakened, the cyclone teared through West Bengal killing 72 people. 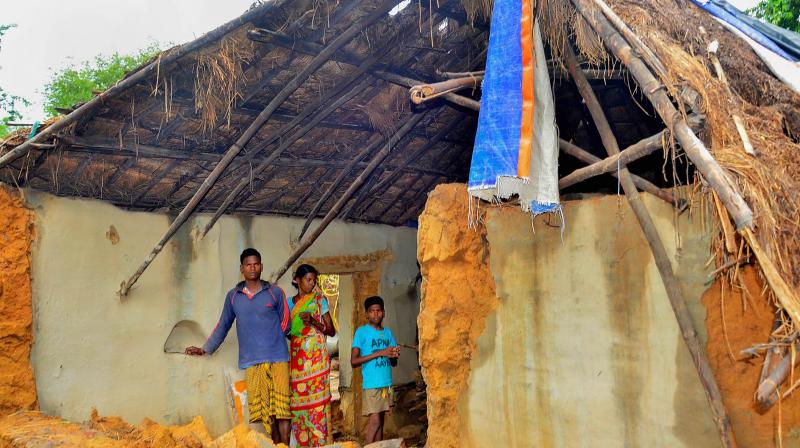 Amid the coronavirus-induced lockdown, the coastal states of West Bengal and Odisha faced the wrath of Cylcone Amphan on Thursday.

Though weakened, the cyclone teared through West Bengal where 72 people were killed and two districts were  completely devastated, with thousands of people left homeless, bridges washed away and low-lying areas in waist deep water.

The fiercest cyclone to hit West Bengal in 100 years destroyed mud houses and crops, and uprooted trees and electric poles.

"So far as per the reports we have received, 72 people have died in the state due to Cyclone Amphan. Two districts North and South 24 Parganas are completely devastated. We have to rebuild those districts from scratch. I would urge the Central government to extend all help to the state," Chief Minister Mamata Banerjee told reporters after conducting a review meeting with officials.

The CM said she would visit the affected areas very soon and that the restoration work would resume at the earliest.

"A large part of North and South 24 Parganas and Kolkata are facing massive power cut since last evening. Even telephone and mobile connections are down," she said.

The chief minister also announced a compensation of Rs 2 lakh to Rs 2.5 lakh for the family members of each of the deceased.

Claiming that she has never witnessed such a fierce cyclone and destruction in her life, Mamata requested Prime Minister Narendra Modi to visit the cyclone-affected areas.

Meanwhile, Modi said no stone will be left unturned in helping those affected by the cyclone.

"Have been seeing visuals from West Bengal on the devastation caused by Cyclone Amphan," he tweeted. In this challenging hour, the entire nation stands in solidarity with West Bengal, the prime minister said.

The cyclonic storm, which triggered heavy rains and accompanied high-velocity winds gusting up to 190 kmph in coastal areas, made a landfall in the Sunderbans in West Bengal on Wednesday evening.

On Thursday, Chief Secretary Tripathy attended a video conference with Union Cabinet Secretary Rajiv Gauba and informed him about the damage caused by the cyclone.

He said the cyclone has affected over 44.80 lakh people in 1,500 gram panchayats, despite the Odisha government evacuating around 2 lakh people from vulnerable areas ahead of the landfall.

Tripathy said the restoration work is in underway on a war-footing, particularly in Jagatsinghpur, Kendrapara, Bhadrak and Balasore, and road connectivity is likely to be restored shortly. But it will take a day or two to fully restore the power supply, he added.

Revenue Minister Sudam Marndi said about 1 lakh hectares of standing crops have been damaged. "District collectors have been asked to send submit initial damage assessment reports in two days and send detailed reports about the extent of damage to agriculture and horticulture after that," he said.