According to the Navy, as many as 188 people who were on the barge when it sunk have been rescued and at least 51 bodies have been recovered 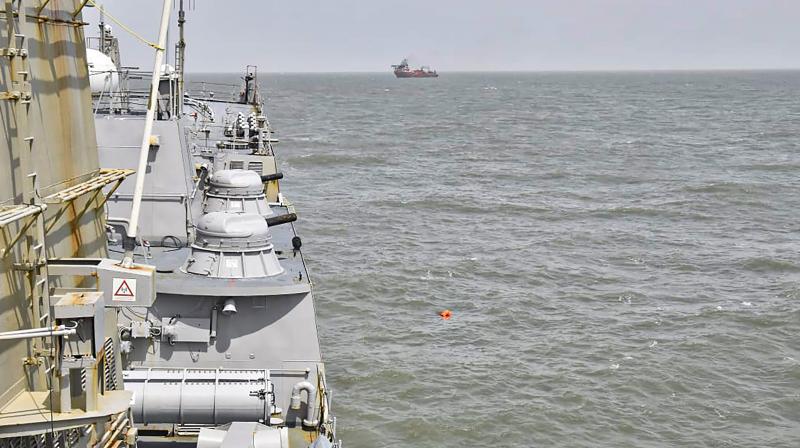 Indian Navy carries out the rescue and search operations for the missing crew members of the barge P305, off the Mumbai coast. (PTI)

Mumbai: The Mumbai Police on Friday registered an FIR against the captain of barge P305, which sank on Monday in the Arabian Sea, 35 nautical miles from Mumbai under the impact of the Cyclone Tauktae.

The barge captain Rakesh Ballav, along with others, has been booked on the basis of a complaint by rescued barge engineer Mustafizur Rehman Shaikh.

According to the police, the case has been registered in Mumbai's Yellow Gate police station.

Police also said it has launched a search for the Captain.

According to the FIR, despite receiving alerts on Cyclone Tauktae approaching, Captain Rakesh Ballav and others did not make any arrangements for the safety of the staff on board, due to which the barge sank in the cyclone storm and many lost their lives.

Barge P305 started drifting after its anchors gave way off the Heera Oil Fields in Bombay High and sank on Monday as cyclonic storm Tauktae brushed past the western coast.

According to the Navy, as many as 188 people who were on the barge when it sunk have been rescued and at least 51 bodies have been recovered from till now with rescue operations still underway.