The J&K govt had provided a free bus service for the Pandits living outside the state to facilitate their travel to Tulla Mulla in Ganderbal district. 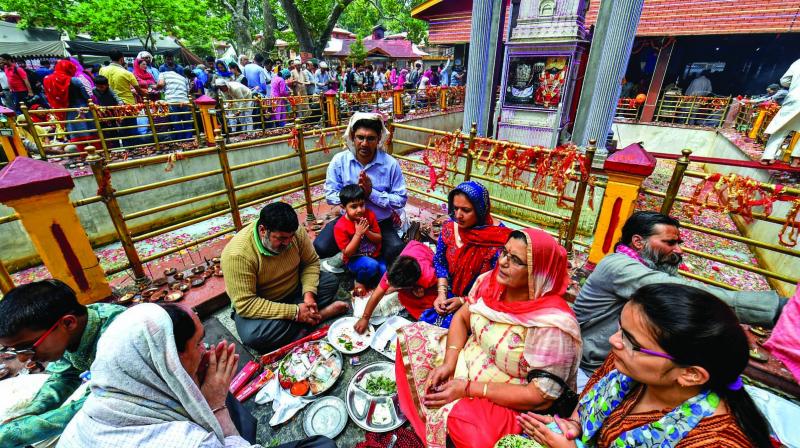 Srinagar: Thousands of Kashmiri Pandits on Wednesday converged at Tulla Mulla, a sleepy village about 27 km north of Srinagar, to participate in the annual Khir Bhawani mela.

Among them were many of the displaced families of the Valley’s Brahmin Hindus who travelled all the way from Delhi and other places in the country to pay obeisance at their most revered place of worship back home.

“Many of us see in this trip the hope that it may see the beginning of the return of the displaced families to their homes,” said Satish Mahaldar, coordinator of the yatra organised by Kashmir Education, Culture and Science Society (KECSS), a Delhi-based organization of Kashmiri Pandits.

The Jammu and Kashmir government had provided a free bus service for the Pandits living outside the state to facilitate their travel to Tulla Mulla in Ganderbal district.

A batch of 120 pilgrims had started journey from “Kashmir House” at Prithvi Raj Road, New Delhi, on June 18. Hundreds of other pilgrims travelled to the Valley from Jammu, Delhi, Mumbai and other parts of the country either on their own or in government provided transport, the officials here said.

A vast majority of Kashmiri Pandits fled their homes and hearth after the separatist campaign burst into a major violence in 1989-90. Majority of the displaced families took shelter in makeshift or rented accommodations in the state’s winter capital Jammu, Delhi and other parts of the country.

Khir Bhawani is a historic temple which sits next to a sacred stream at Tulla Mulla. Kashmiri Pandits turn up in thousands at the place of worship during the annual mela (fair) in June to seek blessings from the goddess Ragnya Devi coinciding with the festival of Zeystha Ashtami.

The spring is on an island and in the centre of it (spring) is a small marble temple. The occasion is the eighth day of the full moon (Ashtami Shuklapak) when, legend has it, the goddess changes the colour of the waters of the spring-to turn rosy, various shades of green, diluted milky and light blue. The devotees wash their clothes and abstain from eating meat. They offer milk, candy sugar raisins, clarified butter and candles amidst chanting vedic and tantaraic hymns.

“This yatra (pilgrimage) to Srinagar could well see the beginning of the return of the displaced Kashmiri Pandits to their homes in Kashmir. This yatra may help change the course in the recent dark history of the State”, Mr. Mahaldar had told this newspaper over the phone before the start of the journey.

He had also said that it would after 28 years of separation from the roots that the Kashmiri Pandits “will finally take a step to return to the Valley”. He had asserted that during this period of displacement they Pandits were often given assurances by the successive governments that their return to their homes in Kashmir was possible. “For various reasons it could not happen. But with the help of the J&K government our struggle for the return to our homes will now become a reality,” Mr. Mahaldar had said.