Referred to as 'Little Cuz' in the viral Twitter thread, the young boy from Allahabad was bullied for wearing red lipstick. 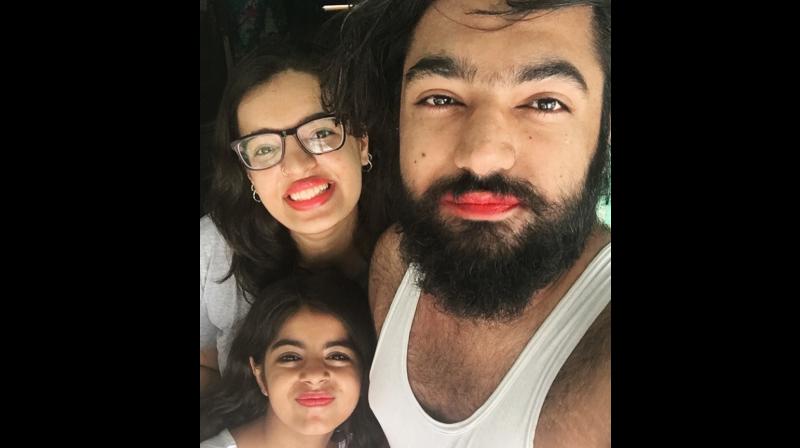 To make their cousin feel empowered and comfortable, Bijlani along with all her cousins wore bright red lipstick and shared pictures on social media to show solidarity. (Photo: Twitter / @BijlaniDiksha)

Mumbai: The story of a young 9-year-old boy from Allahabad has been doing the rounds on Twitter for all the right reasons since Monday. Referred to as 'Little Cuz' in the viral Twitter thread, the young boy was bullied for wearing bright, red lipstick.

According to cousin Diksha Bijlani's Twitter post, little cuz is the most 'effeminate' in the house. He loves to paint nails, wear lipcolour, and learn home science. However, due to this behaviour, he is often made the centre of all jokes.

Recently, when he wore lipstick, little cuz was hurled with a derogatory term.

My cousin, 9, is the most “effeminate” in the house. Let’s call him Little Cuz. Loves to paint nails, wear lipcolour, learn home science! But in this stereotypical alpha male-centric household he’s often the pivot of jokes. Today he applied lipcolour & got called a “chakka” (1/n) pic.twitter.com/mZ2FplPNyP

So he hid behind the curtain & under the bed, shielding his lipcoloured face from the camera & from his mom. Somehow it is always the moms that feel most “embarassed” with their masculine, hardy sons trying makeup. Or anything feminine. (2/n)

To make little cuz feel empowered and comfortable, Bijlani along with all her cousins wore bright red lipstick and shared pictures on social media to show solidarity.

In her Twitter post, Bijlani shared how important it was as elder cousins to undo the conditioned gender binary and normalise gender neutral acts which are deemed feminine.

She also shared that little cuz felt more empowered when he saw his cousin brother sporting the bright red too.

The post was retweeted over 1,000 times and garnered support from all sections of society. A Twitter user also shared a picture of his painted nails in support of little cuz.

With his cousins rallying support for little cuz, he came out and smiled, comfortable in his skin, tweeted Bijlani.

My brother gave up any toxic masculinity & complied to influence Little Cuz. Little Cuz came out & smiled comfortable in his skin.
So important to realise that we owe the responsibility of giving every younger kid a safe space to embrace his place within the gender spectrum(4/n) pic.twitter.com/d9ffsJbsTa

So important to tell little kids gender is a spectrum, a repertoire of places they can visit w/o losing their identity. I hope all of us tell kids we know that they are valid, they are accepted, & they are beautiful today. I hope we don’t become the bullies we warn them of. (5/5)

The next day, Bijlani also shared an update saying that little cuz was ridiculed by his uncle for riding his sister's pink bicycle.