India   All India  21 Jun 2020  Over lakh people perform yoga in Mysuru on International day of Yoga
India, All India 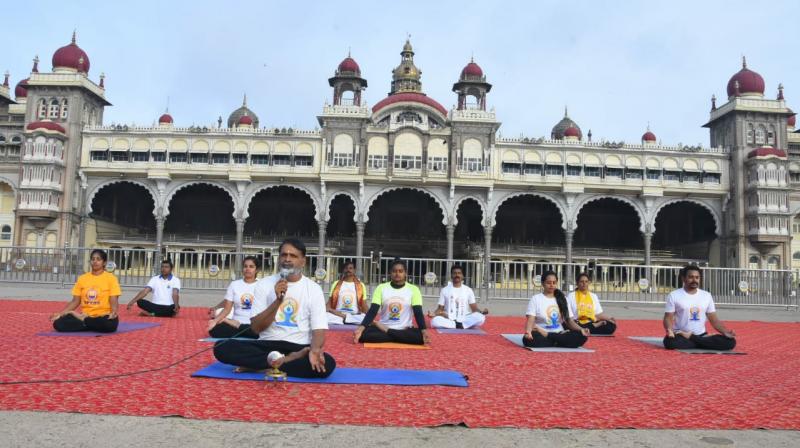 Mysuru: More than a lakh Mysureans including several VIPs and over 100 foreigners stretched their yoga mats on their terraces in Yoga capital of the world Mysuru and performed Yoga with virtual instructions of 12 Yoga experts of Mysuru Yoga federation via face book live from Mysuru Palace premises, as part of 6th International Yoga Day hosted by Mysuru district administration on Sunday Morning between 7am to 7.55am.

Mysuru entered Guinness book of world records for the largest yoga lesson in single venue, with 55,506 participants in 2017. And this year it was planned to invite Prime minister Narendra Modi and assemble 1 lakh people for this year's yoga day. But since mass gathering is not allowed due to covid 19, they hosted yoga on terraces and at home with families on Sunday morning.

Mr Srihari, Vice President of Yoga federation of Mysuru told Deccan Chronicle that there are over 500 yoga institutes and 1000 yoga teachers in Mysuru with whom over 50000 people are practicing yoga regularly. Over 100 foreigners who have come to learn yoga are still in Mysuru. And they all have performed yoga on Sunday morning. We had reached out to all the schools, colleges, organizations which have been part of mass yoga over past five years too.

Last year JSS institution alone had sent 20 thousand students and this year they have called on all their 50000 students to perform yoga at their homes. Last year on Yoga day 70000 people participated in mass yoga at Mysuru race course premises. And this year they would have joined with families. So as per information and our calculation more than 1lakh people have performed Yoga in Mysuru on Sunday morning, he said.

Undeterred by eclipse, stretching their yoga mats on their terraces, watching facebook live, at the tune of Conch shell (Shanka naada) they started 55 minute long Yoga session at 7am. They performed 40 simple, easy, flexible exercises  including, warm up, aasanas, pranayama, dhyana, which are all immunity boosters and as per protocol. Those above 10 years and below 65 years performed Yoga on terraces. And the rest did it at home. And they uploaded photos on Ayush department website for digital certificates.

A 45 minute professional video shoot with 10 ten yoga experts including international Yoga champion Khushi infront of Mysuru Palace was done. And the event was promoted digitally by circulating that video through a website, facebook, whatsapp, telegram app, e mails and other modes of social media.

For past 5 years, every year atleast 50,000 Mysureans have joined mass yoga on international yoga day. It was Krishnamacharya (who was Yoga guru of Maharaja Nalwadi Krishnaraja Wadiyar), and his student, Mr B K S Iyengar both from Mysuru who took yoga to world.