Despite the fact that agriculture is their primary source of livelihood, small farmers have little access to technology and irrigation techniques. 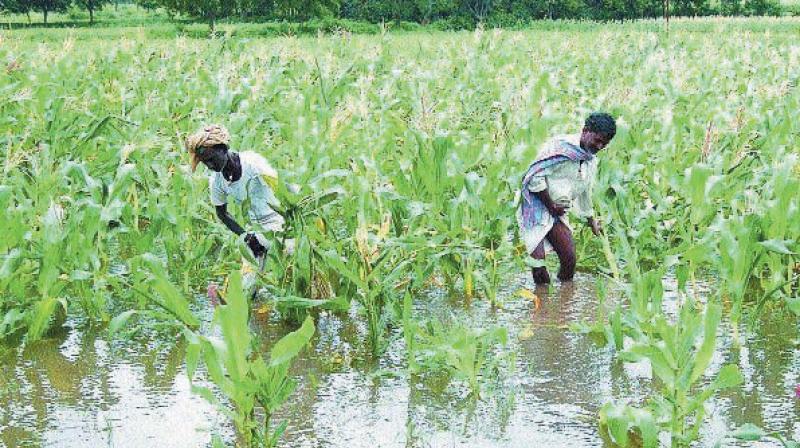 Many farmers switched to new genetically-engineered cotton seeds which are resistant to a deadly pest called “bollworm” and produced far higher yields and healthier crops with less use of pesticides.

His speech if of mortgaged bedding,
On his kine he borrows yet.
At his heart is his daughter’s wedding.
In his eye foreknowledge of debt
He eats and hath indigestion
He toils and he may not stop
His life is a long-drawn question
Between a crop and a crop.
— Rudyard Kipling, The Masque of Plenty

In India, small and marginal farmers — those who work on less than two hectares (five acres) of land — constitute 80 per cent of total farm households, 50 per cent of rural households and 36 per cent of total households. Sadly, the plight of these farmers is very distressing. Agricultural productivity levels have been stagnant for the past 10 to 15 years. An estimated 70 per cent of the country’s arable land is prone to drought, 12 per cent to floods, and eight per cent to cyclones. India’s top policy think tank Niti Aayog recently highlighted that the agricultural sector is 28 years behind its time.

Despite the fact that agriculture is their primary source of livelihood, small farmers have little access to technology and irrigation techniques. This makes them one of the most vulnerable groups to climate change. Farming for them is grinding physical work, largely supported by their family, with each new generation being pushed into increasingly smaller plots of land. From threshing and bundling to separating grains by hand, crops have to be planted, picked, harvested and hauled by hand.

Years of market-oriented reforms have unleashed a wave of capital and entrepreneurialism across India. High-end sectors, such as information technology, have made impressive strides leading to adulatory portrayals of India at home and abroad as an economic juggernaut. Despite this success, the benefits of reform are yet to extend to the hundreds of millions who toil on the land. The government has slashed or phased out subsidies for some crops, shredding a key safety net. The result is a growing social crisis. Fuelled by crushing debt for buying transgenic seeds, failing crops on account of soil abuse by fertilisers, squeezing of prices by big multinational and the government, indifferent farmers are trekking to cities. Here an equally cruel fate awaits them, but they are saved the shame of humiliation in the eyes of their own fellow villagers. A sense of deep despair runs through the lives of farmers. They have lost all hopes — and also the will to fight. Many of them are taking a permanent escape from this physical and emotional pain by ingesting deadly pesticides.

Two decades back, the government embraced the global marketplace and began cutting farm subsidies as it liberalised the managed socialist economy. The farmers’ costs rose as the tariffs that had protected their products were lowered. Many farmers switched to new genetically-engineered cotton seeds which are resistant to a deadly pest called “bollworm” and produced far higher yields and healthier crops with less use of pesticides. The seeds can be more productive and became standardised in many regions of Maharashtra. However, they can be three times more expensive to maintain than traditional seeds.

Small and marginal farmers also do not have access to institutional credit. Most of them depend on village traders, who are also moneylenders, giving them crop loans and pre-harvest consumption loans. Credit histories and collateral may serve to qualify middle-class customers for loans, but most rural smallholder farmers have neither.

The National Sample Survey Office (NSSO) has another hard revelation. During the last decade, the bloated debt of Indian agricultural households has increased almost 400 per cent while their undersized monthly income plummeted by 300 per cent. Even the number of heavily indebted households steeply increased during this period. Most farmers have become victims of the endemic phenomenon of a downward climb along the social ladder, by which the farmer became a sharecropper, and then a peasant without land, then an agricultural labourer, then is eventually forced into exile. It was no use dreaming of climbing the rung in the reverse direction.

A prudent and effective strategy for small farmers is to form clusters for mutual self-help where those growing the same crops come together in organised groups to receive joint training, buy inputs in bulk and start to sell as a single body. Smallholder farmer producer groups are a key component of creating true scale because of the confidence, support and buyer/seller power they provide. This also enables a greater scale of transformation in terms of individuals and communities.

Small farmers also need to go back to their historical lessons and revive several traditional farming practices that have been lost in the rush of new technology. Land levelling, mulching and crop diversification are traditional practices that improve soil health and reduce the excessive spend on fertilisers and chemicals. These inexpensive practices help preserve soil nutrients, prevent erosion, suppress weeds and increase fertility. Crop residues that are mostly burnt in the field, contributing to emissions and local air pollution, can be used productively as mulch. Certified seed can ensure that no money is lost buying fakes trolling the market. There will be no need for expensive diesel gensets for tubewells if farmers adopt efficient irrigation technologies such as the drip and sprinkle. The government should provide proper storage, so that their crops don’t end up rotting before they reach the market. And they need fair terms once they do reach the market.

We believe in “uttam kheti, madhyam vyapar and neech naukri”. India’s first Prime Minister Jawaharlal Nehru said in 1947, “Everything can wait, but not agriculture.” What India is witnessing today is exactly the reverse. All the other sectors in the Indian economy are surging ahead. Agriculture is the only one which is moving in the opposite direction. Within this self-perpetuating cycle of misery, wrapping a noose around the neck are all-too-friendly exits for farmers. While their deaths might bring personal escape, they leave behind crippling emotional, financial and physical burdens, inherited by those left to farm the dust: women who did not die.

The writer is author of Village Diary of a Heretic Banker. He has spent more than three decades in the development sector