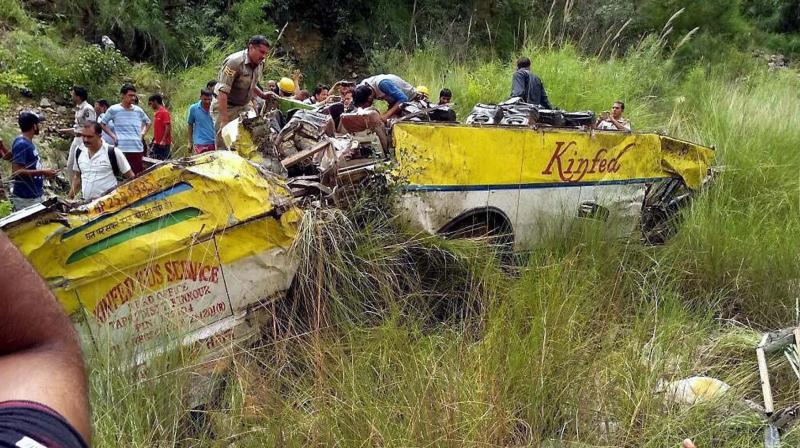 Rescue work in progress after a bus fell down in a river at Rampur in Shimla district of Himachal Pradesh on Thursday. (Photo: PTI)

Shimla: Twenty-eight passengers were killed and eight other injured when a bus plunged into a 500-foot-deep gorge at Khaneri in Rampur on the Hindustan-Tibet National Highway, about 140 km from here, on Thursday.

The private bus was carrying 36 passengers from Reckong Peo in Kinnaur to Nauni in Solan when the accident took place. A magisterial inquiry has been ordered to ascertain the cause of the accident. However, preliminary investigations said a tyre burst led to the accident.

Bodies of all 28 victims have been recovered and 11 of them have been identified, deputy commissioner, Shimla, Rohan Chand Thakur said.

The deceased included 18 men, 9 women and a child. Four of the seriously injured persons have been referred to IGMC Shimla and four other were undergoing treatment at Civil Hospital Khaneri.

The DC said an immediate relief of Rs 10,000 has been given to the next of kin of the deceased. Additional district magistrate Suneel Sharma is at the spot supervising relief and rescue operations. A CISF team is on the spot while a NDRF team from Sunni is on way to Rampur. Prime Minister Narendra Modi on Thursday condoled the loss of lives in a bus accident in Himachal Pradesh.

“My thoughts are with those who lost their loved ones in the tragic bus accident in Himachal Pradesh. May those injured recover quickly,” the Prime Minister tweeted.

Personnel of the National Disaster Relief Force (NDRF) also were at the spot to supervise relief and rescue operations.