Earlier in the day, the Congress had accused PM Modi of “creating an environment” that encouraged mob lynchings in the name of gau raksha. 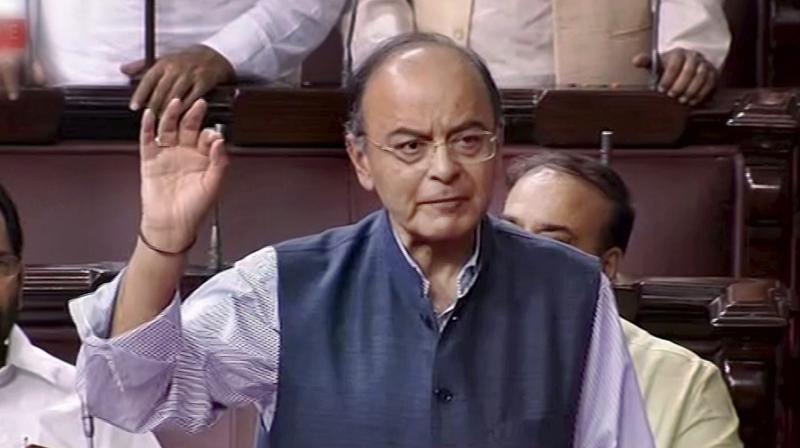 New Delhi: Defending the government in Rajya Sabha during a debate on mob lynchings, Arun Jaitley, finance minister and Leader of the Upper House, said on Thursday that violence can never be a partisan issue and “oppression in the name of cow won’t be tolerated.”

In his long speech, Mr Jaitley questioned the duplicity of the Opposition’s claims on vigilantism, asked parties not to give political colour to cow related violence, and added that nobody had the right to take the law in their own hands. “Sensitivity to the cow could not justify violence,” he said.

Mr Jaitley was participating in a discussion on the “Situation arising out of the reported increase in the incidents of lynching and atrocities on minorities and dalits across the country”, which began on Wednesday.

Earlier, Congress and Trinamul Congress MPs staged a walkout when HRD minister Prakash Javadekar invoked the lynching of 3,000 Sikhs during the 1984 riots, in a classic case of whataboutery that has become the default reaction of the ruling party every time the spotlight is on them.

While pointing out that to “kill a human in the name of cow is unequivocally condemned,” and that lynchings were the “worst crime over mankind” and had no place in a democracy, Mr Javadekar added that provoking anyone “in a place where cow slaughter is prohibited is equally condemnable”.

And then the Union minister, training his gun at the Congress, said, “There is selective amnesia… In 1984, Sikhs were burnt alive. Three thousand Sikhs were lynched… Where are the perpetrators of 1984?”

Leader of the Opposition in Rajya Sabha, Ghulam Nabi Azad, promptly responded. “It is sad that the education minister has such thoughts. I have to tell you that no matter whose government was there, Congress or yours, members of the Sangh Parivar were found to be behind it (lynching)”, he said.

According to reports, about 20 cow vigilante attacks have been reported in the first six months of 2017, a 75 per cent jump over the total number of such incidents in 2016. Most victims of lynchings and mob violence have been dalits or Muslims.

Earlier in the day, the Congress had accused PM Modi of “creating an environment” that encouraged mob lynchings in the name of gau raksha.

Congress leader Kapil Sibal, while speaking in the Rajya Sabha, alleged that the Prime Minister was doing nothing to restrain cow vigilantes who, he said, include elements from VHP and Bajrang Dal.

“I am shaken and shattered by the images of grotesque violence and heart-wrenching scenes (which) I have seen on social media and Twitter. We did not see it in the last 50 years,” he said.

“What is the sentiment behind it? Why 97 per cent of the violence has taken place after 2014?” Mr Sibal said, and added that the year 2017 has witnessed maximum murders and the cattle ban had negatively impacted the leather industry.

Attacking PM Modi, Mr Sibal said, “Even after Mr Modi spoke thrice against violence in the name of cow, how is it that the attacks are taking place? It is because the Prime Minister has created an environment where such actions are encouraged?”

Cow vigilantes and those protecting and encouraging them are “naqli Hindus,” he said.

“You (BJP leaders) say it isn’t related to BJP. But these (cow vigilantes) are your people. VHP has said it will equip gau rakshaks. 2,700 gau senas are operating in states. They are recruited by VHP and trained by the Bajrang Dal. But what is the Prime Minister doing. Quoting Mahatma Gandhi is doublespeak... Your own people are doing this but the PM says these are ‘anti social’ people,” Mr Sibal said.

While declaring that the Centre stood against any violence in the name of cow vigilantism, Mr Jaitley said that “no sympathy” would be shown to the culprits. Rejecting the Opposition charge that no action was being taken, Mr Jaitley said that “legal actions were taken and people were arrested and some of them are still in jail.”

He made it clear that there would be no “ifs and buts” while acting against the vigilantes.