If China pulls Army, we can talk, says Sushma Swaraj 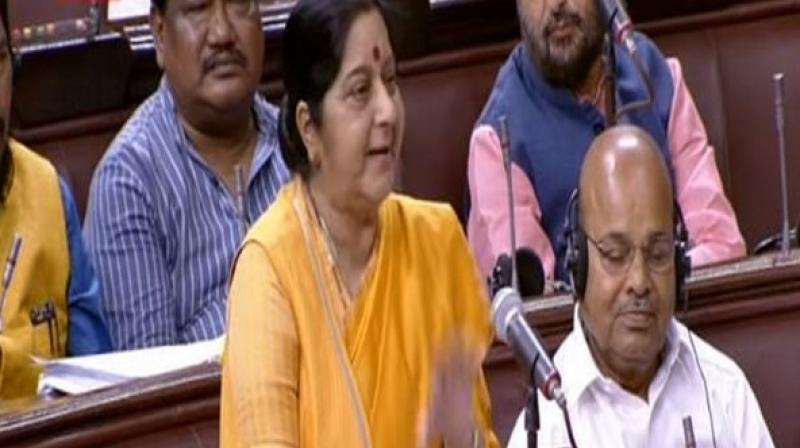 New Delhi/Beijing: India said on Thursday that it is ready for talks with China but that both sides first have to pull back their armies to end the standoff in the Doklam area of Bhutan which China covets. “We are willing to talk, but both sides have to first take back their armies,” external affairs minister Sushma Swaraj told Parliament.

China, meanwhile, said that diplomatic channels with India remained “unimpeded” to discuss the military standoff in Sikkim sector but is insisting that that the withdrawal of the Indian troops from Doklam area is a “precondition” for any  meaningful dialogue. Ms Swaraj also told  Parliament that China’s attempts to unilaterally change the status of the tri-junction with Bhutan pose a challenge to India’s security. She added that India has the support of all countries as  it is legally in the right and that its stand is reasonable. Her ministry later said India would pursue a peaceful resolution of the standoff through diplomatic channels, reiterating its stand that “differences” should not become “disputes”. National Security Adviser (NSA) Ajit Doval, meanwhile, will visit China on a two-day visit on July 27 and 28 for the BRICS NSA’s meet, the MEA confirmed.

Mr Doval is likely to discuss possible options with his Chinese counterpart to resolve the issue on the sidelines of the meet.

In Parliament, Ms Swaraj on Thursday said, “India’s position is not wrong on the tri-junction and all nations are with it. The law is with our country.” Ms Swaraj said all countries are supporting India and they understand that the stand taken by India on the issue is not wrong.

In Beijing, foreign ministry spokesperson Lu Kang told reporters, “Our diplomatic channel is unimpeded,” while confirming talks between Indian and Chinese missions to resolve the standoff. Mr Lu, however, reiterated that “the withdrawal of the Indian border personnel is the precondition for any meaningful dialogue and communication between the two countries”.

Indian and Chinese troops have been locked in a face-off in the Doklam area of Bhutan for over a month after Indian troops stopped the Chinese Army from building a road.