Four of family among eight killed as cloudbursts strike J&K

The police and the Army soon stepped up rescue operation and were being helped by local volunteers. 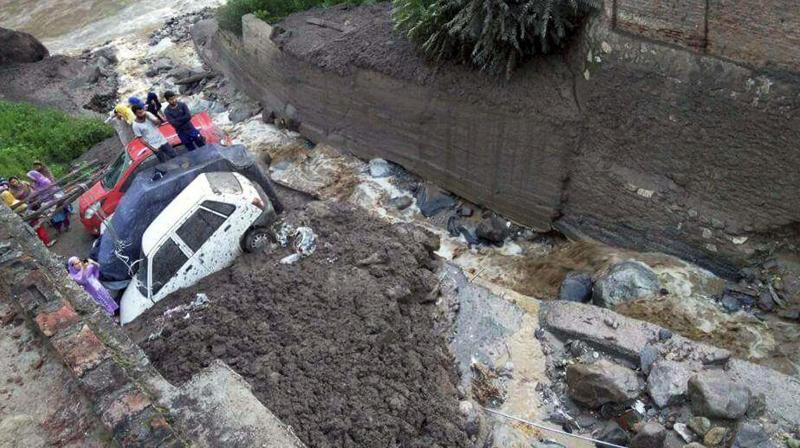 A flash flood washed away houses following a cloudburst at Thatri village in Doda district of Jammu and Kashmir on Thursday. (Photo: PTI)

Srinagar: Eight people, including four members of a family, were killed and a few others went missing as flash floods triggered by a cloudburst wreaked havoc in parts of eastern Doda and Kishtwar districts of Jammu and Kashmir early on Thursday. Twelve people, including a 12-year-old boy, were rescued.

The four members of a family who died in Doda have been identified as 40-year-old Neeru Devi, her daughters Sapna Devi and Priya Devi, aged 14 and seven each and nine-year-old son Rahul. Patna Devi, 45, and Sareshta Devi were the others who lost their lives in Doda. In Kishtwar, 50-year-old Kunji Devi and her five-year-old grandson were killed in a similar incident, officials said.

Half a dozen residential houses, shops, a school and several vehicles were damaged, and livestock perished as the deadly cloudburst brought massive damage to life and property, officials said. Also, the resultant flash floods inundated vast areas along Batote-Doda-Kishtwar highway.

Officials said that the water level and silt suddenly rose in Masjid Nullah in Thathri township of Doda after the cloudburst around 2.20 am, and washed away several structures on both sides of the stream within no time.

A police official, Iftkhar Ahmed, was quoted by local media as saying that the police and the civilian authorities were trying to rescue people still trapped under the debris. “As of now, three female bodies have been recovered from the debris. However, several others are still under the debris and more casualties cannot be ruled out,” he said. Later, officials said that three more bodies were retrieved — those of Neeru Devi’s children. The eight people rescued earlier and another four later during the day are being treated at an emergency hospital at Thathri, officials said. Witnesses said that the victims were buried under layers of mud, silt and stones strewn all over in the affected area. The police and the Army soon stepped up rescue operation and were being helped by local volunteers.

The Batote-Doda-Kishtwar road connecting the hilly region with the Srinagar-Jammu highway has been closed for vehicular traffic. Power supply to the area remains suspended, reports received here said.