The PDP was quick to welcome the statement saying it was happy if Abdullah is asking for talks with Pakistan. 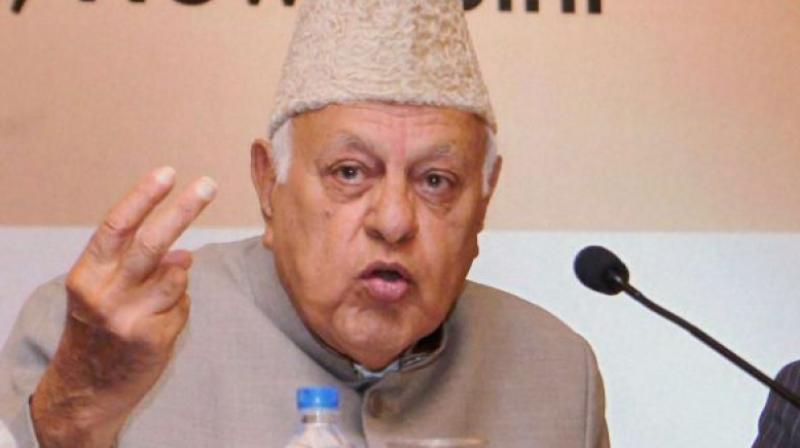 Srinagar: Former Jammu and Kashmir chief minister and National Conference (NC) president Farooq Abdullah has said that India should approach third parties, such as the United States and China, to mediate in the Kashmir dispute.

"For how long are you going to wait? Sometimes, you have to pull the bull by its horns. The way is to have a dialogue. India has so many friends all across the world. They can ask them to act as a mediator. US President Trump himself said that he wants to settle Kashmir problem. China also said that it wants to mediate in Kashmir. Somebody has to be approached," Farooq said in a newspaper interview on Friday.

The BJP and like-minded parties have strongly criticised Farooq for his statement, while many people took to social media platforms to condemn him. However, ruling Peoples’ Democratic Party (PDP), also BJP’s ally in the state, has welcomed the statement and said talks alone can lead to amicable solution on Kashmir.

The PDP was quick to welcome the statement saying it was happy if Abdullah is asking for talks with Pakistan. “If you want to resolve Kashmir issue there is no other way,” PDP’s senior leader Sartaj Madni said.

“If India is ready to talk to China and does not want to get into war, then they can talk to Pakistan also,” he added.

BJP has not only rejected the suggestion, but has also condemned Abdullah for seeking third party intervention on Kashmir.

“He is a man with two faces’, alleged BJP leader and Deputy Chief Minister Nirmal Singh. He said, “I want to tell him when he was chief minister, he talked of attacking Pakistan. Why is he resorting to such double standards?”

The government at the Centre recently reiterated that Kashmir is a bilateral issue with Pakistan and there is no scope for third party mediation.

"Talk about spinning a statement. Dr Abdullah has said friends can be used to facilitate a dialogue with Pakistan, to facilitate a solution. Dr Abdullah didn't call for mediation he said "Trump offered to help & CHINA OFFERED to mediate". How is that the same as him asking for it? There is a difference between facilitation & mediation," said Omar in a series of tweets.

"India has used Int. facilitation-during Kargil war, after Parliament attack Etc. BJP's ally @jkpdp has welcomed Dr Abdullah's statement. I guess that makes the BJPDP anti-national as well. This is what I mean - twist remarks out of shape so that the original intent & message is completely distorted," he added.