India’s HIV response is now on the fast track

India’s progress in its HIV epidemic means that boys like Babu and Manik are reaching new heights and fulfilling their dreams. 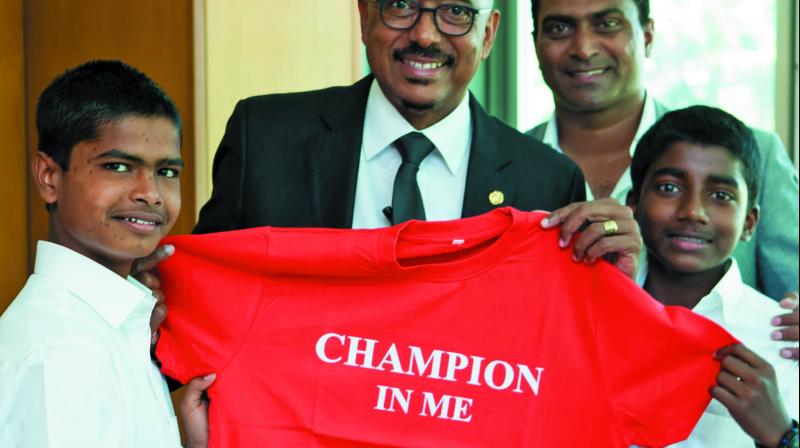 Babu Seenappa and Manik Prabhu are two exceptional teens from Bengaluru who I had the privilege of meeting two summers ago. On the cusp of adulthood, the two 16-year-olds have already done so much. I met them when they had just finished competing in the track and field events at the International Children’s Games in Alkmaar, Netherlands. This June, they finished a 10-km run in Boston, US, in a little more than 40 minutes.

They don’t let living with HIV get in the way of achieving their personal best.

Focus, determination and guts are part of their everyday life. In many ways they are the face of India’s response to HIV, which UNAIDS’ latest Global Report finds has achieved many milestones thanks to the leadership of the government and the strong engagement of civil society and people living with and affected by HIV.

The cornerstone of India’s HIV programme
This partnership between diverse actors is the cornerstone of India’s advance towards ending AIDS as a public health threat by 2030, which India along with all other United Nations member states has committed to achieving as part of the Sustainable Development Goals. To end AIDS, India has to fast track its response in the next four years.

Like many countries in Asia, India’s HIV epidemic is concentrated among key populations, including men who have sex with men, sex workers, transgender people and people who inject drugs. But where India’s national AIDS programme stands out is in its response. Unlike the many countries that have turned a deaf ear to the needs of key populations, India has reached out to them since the early nineties.

It has based its programming decisions on scientific evidence and focused its efforts on high-impact initiatives that are often run by civil society. I still remember the sex work project I visited in East Delhi several years ago. One peer educator proudly spoke about her work promoting condom use and facilitating health referrals for her fellow sex workers. It’s community-based projects like this that have ensured that a phenomenal 75 per cent of female sex workers, 62 per cent of men who have sex with men and transgender people and 81 per cent of people who inject drugs are being reached with a special targeted HIV intervention for key populations. I have seen that success being repeated in several other Indian cities.

The commitment to meeting the needs of key populations has translated into impressive results — in 2016, nearly 80 per cent of people living with HIV were aware of their HIV status. The heroic efforts of health workers and community partners across the subcontinent has also led to a 20 per cent drop in new HIV infections in the past six years. India can be justly proud of this progress, but it is no time to relax. We are concerned to see a slowdown in the pace of this decline and urge India to keep sprinting ahead.

One key recent innovation is that in spring my brother, the Union minister of health and family welfare, J.P. Nadda, took the bold step of pledging to provide free treatment to all people living with HIV in India as part of its commitment to achieving the UNAIDS 90-90-90 targets. Already at the end of 2016, almost half of the 2.1 million people living with HIV were accessing antiretroviral therapy. That’s more than one million people — the second largest number of people living with HIV on treatment in the world. With this new policy, we expect to see at least an additional 600,000 people who already know their status to access treatment rapidly. India has to take innovative steps to ensure that key populations have access to treatment. Thanks to efforts to scale up the treatment, AIDS-related deaths dropped by 46 per cent between 2010 and 2016. AIDS is of course not just about a virus, but about people and the society in which they live. Stigma and discrimination are important barriers to accessing HIV services. When people fear disclosing their status because that could mean losing their jobs, housing or even loved ones, they will stay away from HIV clinics. In April, the Indian Parliament passed a new law that provides strong legal protection against HIV discrimination. This legislation begins to remove barriers and empowers people to challenge violations of their human rights.

The challenges ahead
While India has made big progress, the emergence of HIV in some locations that were earlier considered not high-burden areas is a cause for concern. There is a need to stay a step ahead and re-strategise to address the new vulnerabilities and to expand the scope of services.

While some southern states have achieved excellent results in terms of preventing the transmission of HIV from mother to child, this is not the case everywhere. India has the world’s third largest epidemic and the country has a major role to play in ensuring that we reach our shared goal of ending AIDS globally. Its expertise in designing highly effective HIV programmes tailored to the needs of key populations is a model for the rest of the world. This know-how can save lives far beyond its borders and UNAIDS encourages India to share its experience.

The country’s production of low-cost generic medicines has been instrumental in scaling up access to HIV treatment globally. India can also lead the way in building meaningful South-South collaboration that will enable African countries to set up their own quality manufacturing units and produce essential medicines. Health is a basic human right and health equity is a must. It is non-negotiable.

India’s progress in its HIV epidemic means that boys like Babu and Manik are reaching new heights and fulfilling their dreams. At 16, they have a world of opportunity ahead. I believe if India’s HIV response keeps its focus, determination and guts, before these young men turn 30 the country will have raced to the finish line. We will end AIDS. We must end AIDS. To do anything less is to turn our backs on a generation of young people like Babu and Manik.

The writer is the executive director of UNAIDS