A tent, a DJ and multi-colored balloons came up in Jhinjhak where Pyarelal Kovind, eldest brother of Ram Nath Kovind lives. 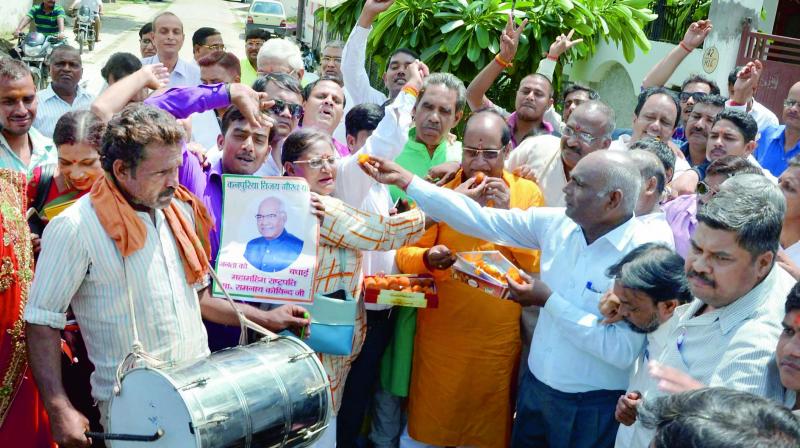 Lucknow: Celebrations began in Kanpur Dehat, the native town of President elect Ram Nath Kovind, soon after the announcement of his victory.

A tent, a DJ and multi-colored balloons came up in Jhinjhak where Pyarelal Kovind, eldest brother of Ram Nath Kovind lives.

Since everyone seemed to have had an overdose of  “laddoos” in the past few days, it was time for “golgappas” that were offered to all those who joined in the celebrations.

With free golgappas doing  the rounds, the crowds swelled and the DJ played — “Nach lene de mainu, nach lene de... Baba ki bani sarkaar”. Dhol players arrived an hour later and took over. An elderly lady walked in with a “jhola” full of “batasha” — an indigenous sweet made only of sugar — and distributed handfuls to all present there.

Mr Kovind’s house in Kalyanpur in Kanpur was also decorated with balloons by neighbours who did not lose time in putting up a sign board giving directions to the “Rashtrapathi Awas”.

“This signboard will now ensure that good times are here to stay. We will not have any problems with basic amenities now,” said Rakesh, a local resident.

“It gives us immense pleasure and pride that Kovindji, who has been chosen as the country’s 14th President, is a resident of ward number 20 of Kanpur municipal corporation, which I have the privilege of representing,” Sanjay Batham, the local corporator said. “For us, it is Diwali, Holi and Dussehra today”, he said.

The teachers of DAV College, where Mr Kovind had studied said they were proud of his achievement. “For us it is indeed a glorious moment, as one of the proud alumnus of our college is now going to occupy the top constitutional post of the country.”