Ram Nath Kovind is second dalit after K.R. Narayanan, and first BJP member to be President. 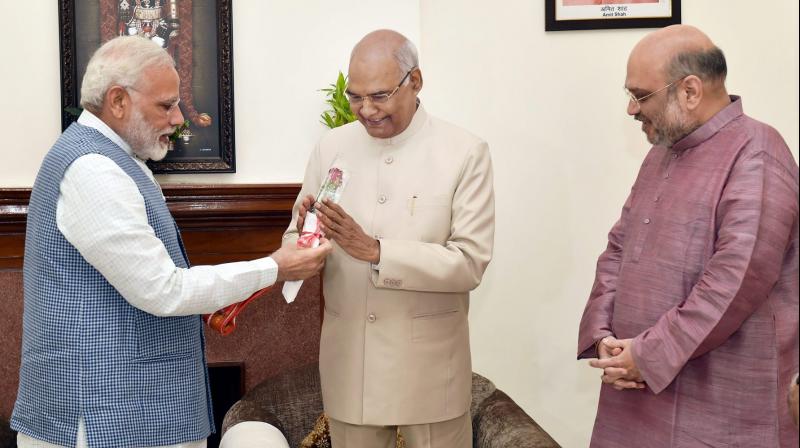 New Delhi: The NDA’s candidate Ram Nath Kovind on Wednesday became the 14th President of India. Mr Kovind trounced his rival and Opposition candidate Meira Kumar by securing 65.65 per cent of the votes.

Mr Kovind would be the second dalit President after K.R. Narayanan, and the first BJP member to hold the office of the President. He will be sworn in on July 25.

Ms Kumar, who promised to “continue the ideological battle” after the results were announced, lagged far behind with 34.35 per cent votes. On hearing of his victory, Mr Kovind, whose selection had surprised many even within the BJP, said that it was an “emotional moment”.

Reminiscing on his journey thus far, which will culminate at Rashtrpati Bhavan, Mr Kovind recalled the time when the thatched roofed of his mud hut would leak.

“Today there are many Ram Nath Kovinds who are getting drenched in the rain, working hard, toiling in the fields for one square meal in the evening,” he said.

The President-elect said he would be their “representative in the Rashtrapati Bhavan”. In five days, Mr Kovind will move into the five-acre presidential palace built on the 330-acre estate in the heart of the national capital.

BJP chief Amit Shah hailed Mr Kovind’s victory as “historic” and added that it was the “victory for the poor, downtrodden and marginalised and their aspirations.”

Read: 14th President was always a ‘frontbencher’ in class

Ms Kumar tweeted her congratulations: “I congratulate Sh. Ram Nath Kovindji for becoming the President of India. My best wishes are with Sh. Kovindji as it has fallen upon him to uphold the Constitution in letter and spirit in these challenging times”.

The total value of votes polled by Mr Kovind was 7,02,044, while Ms Kumar got 3,67,314. What raised eyebrows was cross-voting in favour of NDA’s candidate.

Cross-voting in favour of Mr Kovind was witnessed in Goa, Gujarat, Uttar Pradesh and Karnataka. Prime Minister Narendra Modi said that he was “gladdened by the extensive support for Ram Nath Kovind Ji among MPs and across various states.”