Earlier in the day, Abdullah said that India should approach third parties, such as the US and China, to mediate in the Kashmir issue. 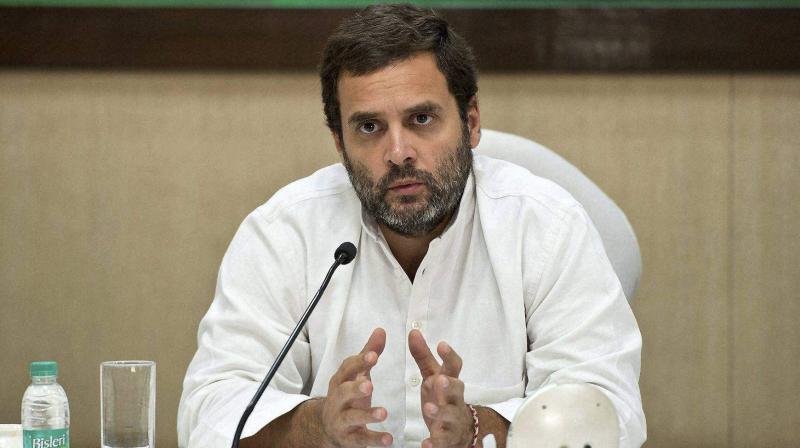 This is not the first time when the Congress vice-president has blamed Prime Minister Modi for creating space for militancy in the state. (Photo: PTI/File)

New Delhi: Congress Vice-President Rahul Gandhi has refuted former Jammu and Kashmir chief minister Farooq Abdullah's assertion that a third party can be approached for the settlement of the Kashmir issue between India and Pakistan.

"I have been asserting for long that it's Prime Minister Narendra Modi and his policies at the Centre that have destroyed Jammu and Kashmir. And the point that is being mentioned that a third party's intervention should be invited for the settlement of the issue, it's wrong. India is Kashmir and Kashmir is India," Rahul said on Friday.

"It's our internal matter and no other country should have any say in it," he added.

Earlier in the day, Abdullah said that India should approach third parties, such as the United States and China, to mediate in the Kashmir issue.

Adbullah said India has so many allies across the globe, which can be approached for settling the Kashmir issue to act as a mediator between India and Pakistan.

"For how long are you going to wait? Sometimes, you have to pull the bull by its horns. The way is to have a dialogue. India has so many friends all across the world. They can ask them to act as a mediator. US President Trump himself said that he wants to settle Kashmir problem. China also said that it wants to mediate in Kashmir. Somebody has to be approached," Abdullah said.

This is not the first time when the Congress vice-president has blamed Prime Minister Modi for creating space for militancy in the state.

The BJP reacted by blaming the country's first prime minister and Rahul's great-grandfather Jawaharlal Nehru and the Gandhi family for all the problems in Kashmir.

Union minister Smriti Irani also hit out at Rahul for criticising Prime Minister Modi for the attack on Amarnath pilgrims and politicising the issue at a time when the country was "united against terrorism".

The BJP also has been dubbing Rahul Gandhi as "immature" owing to his tweets targetted at the Centre.