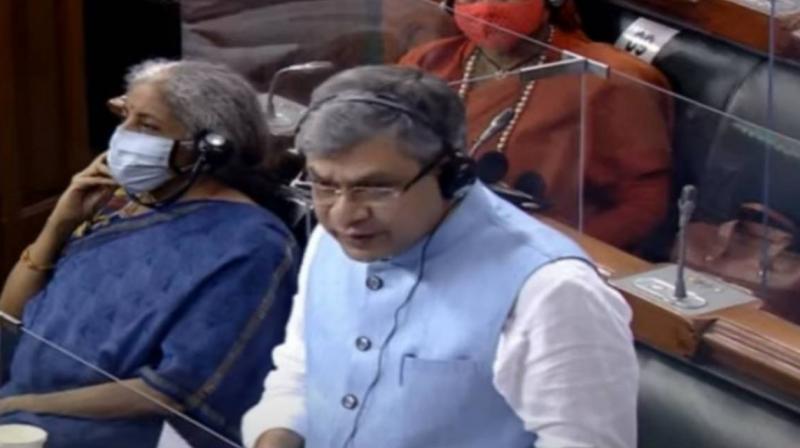 New Delhi: The Pegasus snooping issue continued to rock Parliament for the second day of the Monsoon Session as the Opposition members disrupted the proceedings in both Houses. After failed efforts to pacify members in the Lok Sabha, the Speaker adjourned House proceedings for the day while the Rajya Sabha managed to have a discussion on the Covid situation in the country despite repeated adjournments. Both Houses will resume on Thursday after a day’s break due to Id-ul-Zuha on Wednesday.

The Opposition on Tuesday stepped up its attack on the government over the alleged use of Israeli spyware Pegasus for “snooping into a number of phones of Opposition leaders, journalists, activists and numerous others" and demanded a probe by a Joint Parliamentary Committee. The Opposition also demanded the sacking of the Union home minister Amit Shah. The Congress accused the government of “treason” and held Mr Shah responsible for the snooping and hacking of phones and demanded a probe into the “role of the Prime Minister” in the entire matter as well. The demand for a probe came from the Opposition parties, including the Congress, TMC, NCP, Left parties, RJD and Shiv Sena.

The government has strongly denied the allegations. The BJP hit back at the Congress and claimed that “there is not a shred of evidence” to link either the ruling party or the Narendra Modi government with the issue.

The Opposition members displayed placards in the House which said while people are suffering from unemployment, the government is busy with “jasoosi” (spying). Some Congress members held placards on Rahul Gandhi’s name appearing in the list of potential targets of snooping.

Hitting out at the government, senior Congress leader Kapil Sibal sought an inquiry by at least three sitting judges on the issue and demanded that the government come out with a white paper on the subject. The Congress alleged that phone numbers linked to the JD(S)-Congress government in Karnataka were possible targets for surveillance in 2019, at a time when the ruling coalition collapsed and the B.S. Yediyurappa-led BJP took power, The Wire news portal said in the latest revelations on the Israeli spyware Pegasus. Key numbers were allegedly selected when the H.D. Kumaraswamy-led government was battling a huge crisis after a rebellion by MLAs. The phone numbers of deputy chief minister G. Parameshwara and the personal secretaries of chief minister H.D. Kumaraswamy and former CM Siddaramaiah were allegedly selected as potential targets.

The Trinamul Congress said it will continue to disrupt Parliament till the government comes clean on the charges of snooping and surveillance. Trinamul MPs also protested near the Gandhi statue in the Parliament courtyard after the name of its Lok Sabha MP Abhishek Banerjee and of poll strategist Prashant Kishor came up.

TMC Lok Sabha MP Mahua Moitra said: “We are saying on record that the IT minister lied on the floor of the House. We just want the PM, HM and the IT minister to answer if India is a client of NSO (Israeli firm that makes the Pegasus spyware) or not? We have a list of questions for the government, and we will not allow Parliament to run unless these questions are answered.”

Ms Moitra asked: “Has any department under the Government of India purchased Pegasus? Is the spyware being used currently? Which agency has requisitioned this data and where is it being retained?”

“This (Pegasus spyware) is a serious issue and the TMC will not compromise on it. We will not let either House run till this government comes clean on the charges of snooping and surveillance. The government has spent millions to hack into phones at a time when the country is dealing with a pandemic,” TMC Rajya Sabha MP Derek O’Brien said.

The Rajya Sabha proceedings were adjourned twice during the pre-lunch period after an uproar by Opposition members. Opposition members had given 15 notices under Rule 267 requiring suspension of the business of the day to take up the issue they want to raise. They raised slogans and rushed into the Well of the House, prompting Chairman M. Venkaiah Naidu to adjourn the proceedings.

Leader of the Opposition in the Rajya Sabha Mallikarjun Kharge said Mr Amit Shah should immediately resign as he “does not deserve” to occupy the position he holds while the Congress’ Lok Sabha leader Adhir Ranjan Chowdhury said: “Modi ji promotes Digital India, but what we are seeing is Surveillance India”.