The Supreme Court said the bail has been granted subject to certain conditions. 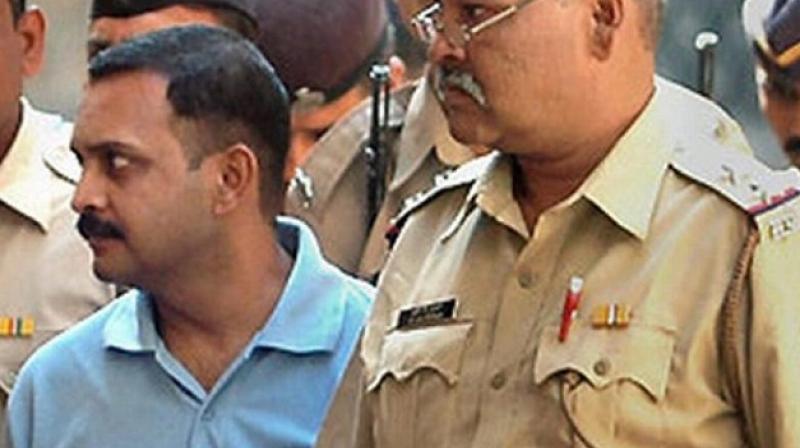 Lt Colonel Purohit, a former military intelligence officer, is one of the accused in the 2008 Malegaon blasts along with Sadhvi Pragya and others. (Photo: PTI)

New Delhi: After nine years in jail, Lt Colonel Prasad Shrikant Purohit accused in the 2008 Malegaon blast was at last granted bail by the apex court of India.

While granting bail, the apex court said, "we set aside order of Bombay High court."

The apex court said the bail has been granted subject to certain conditions.

The conditions will be spelled out by the court later.

A bench of Justices R K Agrawal and A M Sapre said they are setting aside the Bombay High Court order by which the bail was denied.

Talking to ANI, former Anti-Terrorism Squad (ATS) Chief KP Raghuvanshi said he would comment after detailed order, but he stands by the initial investigation which they had conducted.

Earlier on August 17, Purohit had told the apex court that he has been caught in the "political crossfire" and has been languishing in jail for nine years.

Lt Colonel Purohit's bail plea was earlier rejected by the Bombay High Court saying the charges against him were of a grave nature, after which he moved the top court.

A special Maharashtra Control of Organised Crime Act (MCOCA) court had earlier ruled that the Anti-Terrorism Squad (ATS) had wrongly applied this law against Sadhvi Pragya Thakur, Purohit and nine others.

The 4,000-page chargesheet had alleged that Malegaon was selected as the blast target because of a sizeable Muslim population there.

It had named Thakur, Purohit and co-accused, Swami Dayanand Pandey as the key conspirators.

However, Thakur was, in 2016, given clean chit by the National Investigation Agency (NIA).

Sadhvi Pragya has been granted relief in the case by the Bombay High Court.

Read: Sadhvi says no evidence against her, seeks bail

Seven people were killed in a bomb blast on September 29, 2008, at Malegaon, a communally-sensitive textile town in Nashik district of north Maharashtra.