Was maintenance work being done on the tracks without following guidelines? 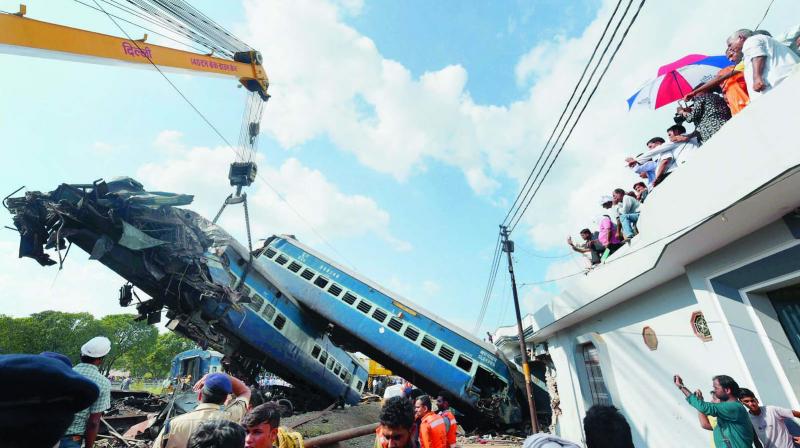 A mangled coach of the Puri-Hardwar Utkal Express train being hauled off the tracks by a crane at the accident site in Khatauli near Muzaffarnagar. (Photo: PTI)

New Delhi/Lucknow: The Railways indicated on Sunday that negligence could be the reason behind the derailment of the Utkal Express, with a senior official saying a probe would ascertain if any maintenance work was being done on the tracks without permission. It was “not clear” what kind of work was going on at the site, said Mohammed Jamshed, the Railway Board’s member (traffic), in New Delhi. “Any work on the tracks has to follow a manual. We have maintenance manuals which lay down the guidelines for work on any kind of railway infrastructure,” he told the media. A probe will ascertain if work was being carried out on the tracks, and whether the rules were followed.

Also, cracking the whip over the derailment, three top railway officials, including the member (engineering) of the Railway Board, who holds the rank of a secretary to the government, as well as the Northern Railway general manager and the DRM, Delhi division, were sent on leave. Four other officials were suspended — the senior divisional engineer, assistant engineer, a senior section engineer (permanent way), responsible for track maintenance, and a junior engineer. The chief track engineer of Northern Railway was ordered transferred.

Confusion also prevailed over the number of casualties and injured persons in the Muzaffarnagar train accident on Saturday. The Uttar Pradesh government, after issuing a release on Saturday night putting the number of dead persons at 23, brought down the casualty figures on Sunday to 21. UP’s principal secretary (information) Awanish Awasthi said the number of the injured had shot up to 156. He said that with one more injured person succumbing to injuries at a Meerut hospital, the total number of deaths stood at 21.

In New Delhi, the Railways said the probe, to begin on Monday, will be conducted by commissioner of railway safety Shailesh Kumar Pathak, who will look into “every angle, be it sabotage, technical lapse or manual fault”.

Mr Jamshed, who visited the spot in Khatauli where the accident occurred on Saturday, said he saw maintenance tools on the tracks. “There is some audio clip of some conversation that we will probe. Also, when we did the site inspection, we saw some equipment the Railways use for track repair present there.” he said.

“Whenever this kind of a big accident happens, coaches get smashed, toppled, capsized and derailed. In this case, a 200-metre track has been damaged completely. It has to be investigated in detail. All measurements are being taken, every lapse is being taken into account,” he said.

Explaining the maintenance steps the Railways follow, Mr Jamshed wondered if this had been done in this case. “Fixed infrastructure on which the rail network runs like tracks, overhead equipment and signals are regularly maintained as per schedule. Maintenance of tracks is done during operations by blocking them, according to a fixed time and schedule. Written permission needs to be taken for this work,” he said. He also said sometimes repair needs to be done on an emergency basis, but even then, if the next station is informed, the consequent trains are stopped. “Then we get our supervisors on the track which is inspected and repaired, after which the trains are allowed to run with a speed restriction. Red flags are also shown to trains in case there is a problem on the tracks,” he said. He said it would be investigated if these protocols were followed this time.

“Prima facie the information is that there is divisional responsibility involved if work was being done without seeking permission,” he said. He said that most of the injured were shifted to Meerut. “The number of dead may go up as reports say several of them are in a critical condition,” he added.

The railway ministry said in a release early Sunday that 21 people were killed and 97 others injured, 26 of them grievously, in Saturday’s derailment. In UP, the district magistrate of Muzaffarnagar, Mr G.S. Priyadarshi, said the total number of coaches that were derailed were 12, including one pantry car and 11 passenger coaches.

Delhi division DRM R.N. Singh told PTI that the train had 23 coaches, of which 13 had derailed. The state government, on Saturday night, had stated that eight bogies had derailed, which led to the mishap.

A large number of passengers, meanwhile, are still looking for their missing family members. The food packets given to stranded passengers on Sunday morning proved insufficient and local tea stall owners provided free tea and snacks to the passengers. The government spokesman, however, denied reports in a section of the media about several customers at a tea stall also being crushed under the flying bogies. Railway officials are supervising the repair of railway tracks and traffic on this route is likely to be restored later on Sunday night. Buses are also being provided to passengers who wish to continue their onward journey.