It said without ILP, the National Register of Citizens (NRC) can only partially safeguard the indigenous people. 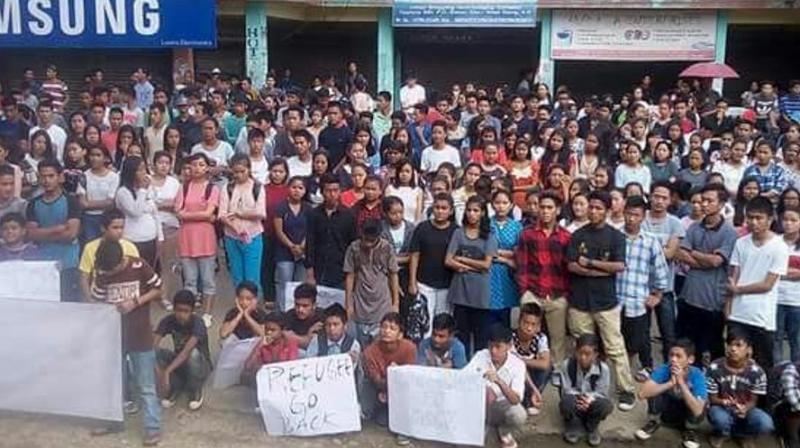 The apex students’ body, which launched the drive on August 17, also had a discussion with the All Assam Students’ Union (AASU) and apprised them about their drive. (Photo: ANI)

Guwahati: Hundreds of daily wage workers have left Arunachal Pradesh and are returning back to Assam after the All Arunachal Pradesh Students’ Union (AAPSU) launched the first phase of the statewide “Operation Clean Drive” against illegal immigrants and inner line permit (ILP) violators in the frontier state.

In a statement, the convener of the the Operation Clean Drive, Tatung Taga said that the operation which was launched on Friday saw the detection of 2,205 ILP violators across the state according to the reports submitted by the federal units of AAPSU in the districts.

Admitting that 80 per cent of such violators have left the state voluntarily, the statement said, “These violators should be immediately deported from the state and necessary action should be initiated under the provisions of the Bengal Eastern Frontier Regulation (BEFR) Act, 1873.”

AAPSU president Hawa Bagang told this newspaper that the objective of their drive is to check infiltration of illegal migrants and regulate the ILP system in Arunachal Pradesh effectively. He however clarified that they are not going to harass any Indian citizen.

The apex students’ body, which launched the drive on August 17, also had a discussion with the All Assam Students’ Union (AASU) and apprised them about their drive.

The AAPSU leaders reiterated that the drive was solely for ILP violators and no any Indian citizen would be harassed during the exercise. In order to avoid any confusion the leading students body of Assam and Arunachal Pradesh has also decided to extend their constructive support to each other.

It is significant that the AAPSU has also decided to launch agitation in the state to press for preparing the National Register of Citizen in the frontier state of Arunachal Pradesh also.

In this regard the North East Students Organisation (NESO) is contemplating to hold meeting with all its constituent organisations to place the demand to update the National Register of Citizens in all northeastern states.

The Asom Jatiyatabadi Yuba Chatra Parishad, a youth organisation of Assam, on Monday organised a statewide protest to push for introduction of inner-line permit in Assam also.

It said without ILP, the National Register of Citizens (NRC) can only partially safeguard the indigenous people.

The AJYCP, which apprehends a threat to the indigenous people of Assam not only from illegal immigrants but also from people who come from other states and settle here, has been demanding introduction of ILP since its formation in 1978. (EOM)