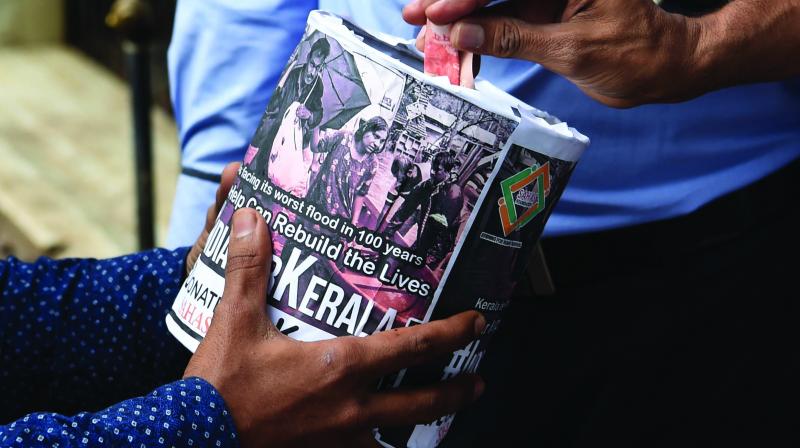 This categorisation will enable the state get greater monetary and other assistance from the Centre.

Thiruvananthapuram/New Delhi: The Union government on Monday declared the devastating floods in Kerala a “calamity of severe nature”, paving the way for higher Central monetary help, as the state braced for the gigantic task of reconstruction and rehabilitation of lakhs of people rendered homeless.

The death toll in the current spell of monsoon fury that began on August 8 has risen to 223, officials said. “Keeping in view the intensity and magnitude of the floods and landslides in Kerala, this is a calamity of a severe nature for all practical purposes,” a home ministry official said in New Delhi.

This categorisation will enable the state get greater monetary and other assistance from the Centre.

Kerala chief minister Pinarayi Vijayan told reporters in Thiruvananthapuram, “Over 10.78 lakh displaced people, including 2.12 lakh women and one lakh children below 12 years of age, have been sheltered  in 3,200 relief camps. Today, 602 persons were rescued from various places as the rains receded.”

Mr Vijayan said there has been demands from various quarters to declare the floods as a national calamity.

“Our demand is also the same. But the Centre is pointing out certain technical difficulties to make such an announcement. What we need now is to evaluate the total loss and get an equivalent assistance from the Centre,” he said.

“As per preliminary estimates, the state has so far suffered a loss of nearly Rs 20,000 crore. The Union government has so far rendered all help to the state. Kerala received Rs 210 crore towards the Chief Minister’s Distress Relief Fund and a promise of Rs 160 crore,” he said.

With flood water level receding in many places, people have started returning to their homes and begun cleaning operations. The state government has also decided to distribute cleaning kits to them, Mr Vijayan said.

Relief material, including provisions, water and fuel have started arriving at the Kochi port from different parts of the country, official sources said.

On Monday, the Centre dispatched 100 metric tonnes of pulses,  52 metric tonnes emergency medicines to Kerala besides ensuring supply of 2,600 MW power to the state

K. Santosh, director of India Meteorological Department’s Thiruvananthapuram centre said all rain alerts have been withdrawn and the state experienced only light to moderate rainfall on Monday. Similar precipitation has been forecast for the next five days.

The Army, Navy, and NDRF teams continued their rescue efforts.Lt. Gen. D R Soni, the chief of the Army’s Southern Command, told reporters in Thiruvananthapuram that rescue operations were still continuing and drones being used to help reach to people trapped in areas not easily accessible.

He said 1,500 army personnel were engaged in rescue operations and people stranded on rooftops and inaccesible areas were being winched with the help of defence helicopters.

The Navy, meanwhile, has started scaling down “Operation Madad” after rains have ebbed and floodwaters receded from many areas.  As of 4.30 pm on Monday, the 11th day of the operation, the number of diving teams has been reduced to 51, with 41 teams having returned after their rescue mission, a defence statement said.

A team of around 100 doctors and paramedical staff from Maharashtra left for Kerala on Monday to help the flood- affected people.