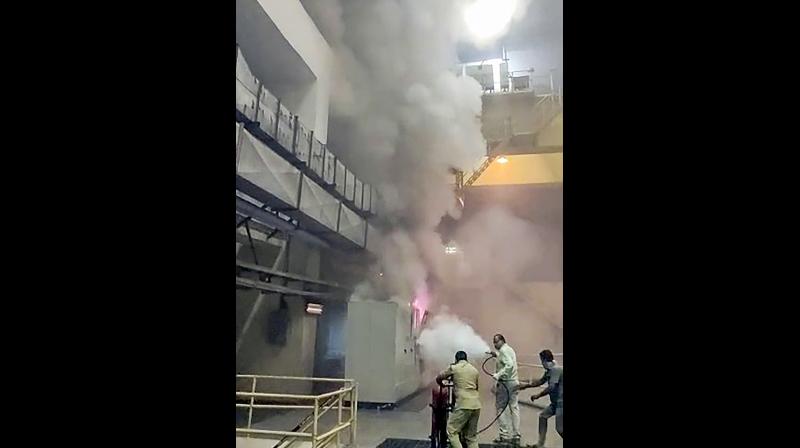 Fire brigade at the site. (PTI)

Hyderabad: Nine people died in a fire mishap in the Srisailam hydroelectric plant on the Telangana-Andhra Pradesh border on Friday, a senior government official said.

Six bodies, out of the nine dead, have been recovered by rescue teams so far and efforts were on to pull out the others from the underground plant,  Nagarkurnool District Collector L Sharman said. The Collector told PTI that five fire engines were engaged in the operation.

According to B Suresh, Chief Engineer of Telangana State Power Generation Corporation (GENCO), there were nearly 25 people at the powerhouse when the mishap took place. However, about 15 or 16 managed to come out.

Earlier, a police official had said six persons were admitted to local hospitals for treatment for suffocation.

The fire was brought under control but thick smoke engulfed the underground area of the powerhouse making rescue operations difficult, officials said.

Two of the nine who were trapped and later died belonged to a private firm that maintains batteries, officials said.

"There are three emergency exits in the pant. There is a possibility that they (trapped) can come out through them. But we cannot say until the smoke is cleared and the rescue teams can go inside," Suresh earlier said.

The plant is located in a one km long tunnel and the fire is suspected to have broke out at the service bay area in the Main Control Room, a Fire Department official said.

Officials of the Singareni collieries were also contacted for their help since they have expertise in underground rescue operations, he added.

Chief Minister K Chandrasekhar Rao expressed shock over the accident, and continued to monitor the operations through Reddy, while Union Minister of State for Home, Kishan Reddy pressed NDRF into the rescue efforts.