India   All India  21 Aug 2020  We will not remain silent on arbitrary abrogation of J&K's special status: Farooq Abdullah
India, All India

We will not remain silent on arbitrary abrogation of J&K's special status: Farooq Abdullah 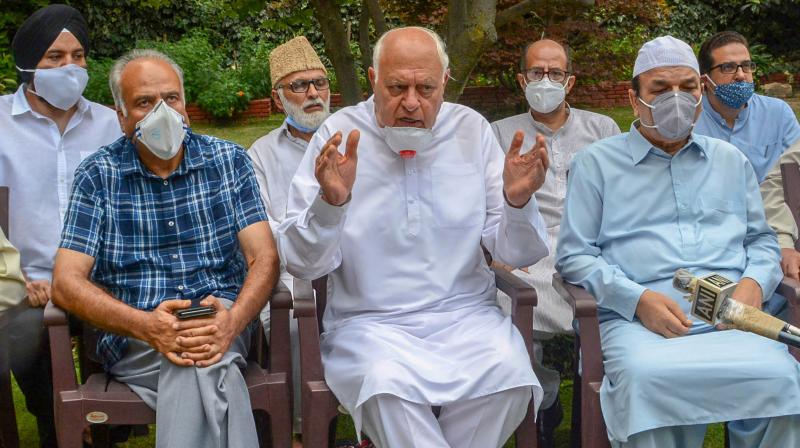 National Conference President Farooq Abdullah addresses a press conference after holding a meeting with party leaders, including those leaders who were detained post-August 05, 2019 and released recently, at his residence in Srinagar. (PTI)

Srinagar: Former chief minister and National Conference president Farooq Abdullah on Thursday said that he or his party will not remain silent on the issue of the erstwhile state of being stripped of its special status by the Centre “arbitrarily”.

“We won’t remain silent on the abrogation of Article 370. We’re not helpless. God is our savior,” he said after holding a marathon discussion with his senior party colleagues to chalk out its future strategy and to look at ways and means of seeking lifting of curbs on the other party men.

It was for the first time since August 5 last year that Abdullah, a sitting Lok Sabha MP, could deliberate on issues face to face with his party colleagues. The meeting was held at his residence along Srinagar’s Gupkar Road and was attended by two other NC MPs Hasnain Masoori and Muhammad Akbar Lone and senior party leaders Muhammad Shaffi ‘Uri’, Abdur Rahim Rather, Ali Muhammad Sagar who is also the party general secretary, Nasir Aslam Wani and some others.

Abdullah said he would be meeting five more party leaders at a separate meeting on Friday and that such interactions would continue in coming days.

Earlier on Wednesday, the NC had said that it had taken a note of the government’s statement before the J&K High Court that none of its leaders was in detention. The court is hearing several habeas corpus petitions filed by Abdullah and his son Omar Abdullah who is the party vice president seeking the liberty of various party colleagues from their “illegal” house detention.

While speaking to reporters, Abdullah said, “Government is lying. All leaders are not free. Sixteen leaders are still facing house detention. They can’t come out from their houses. I am grateful to God that those sitting beside me are free.”

He, however, declined to divulge the details of his discussion with the first group of party leaders at Thursday’s meeting. “When all meetings will take place, I will tell you about the results. Let all the leaders be free”, he said adding “I want my leaders to be as free as you (media).”

Reiterating the main issue faced by J&K today was how to bring back its special status than statehood or doing away with the new domicile law, he said, “As said we will not remain silent over what was done to Jammu and Kashmir. I couldn’t attend Parliament because I was not free. Let me attend the Parliament and you will see what I will do.”