India   All India  21 Sep 2017  Rohingyas illegal immigrants, not against law to deport them: Rajnath Singh
India, All India

Rohingyas illegal immigrants, not against law to deport them: Rajnath Singh

The Centre had said the continuance of the Rohingyas’ immigration and their stay was found to have serious national security ramifications. 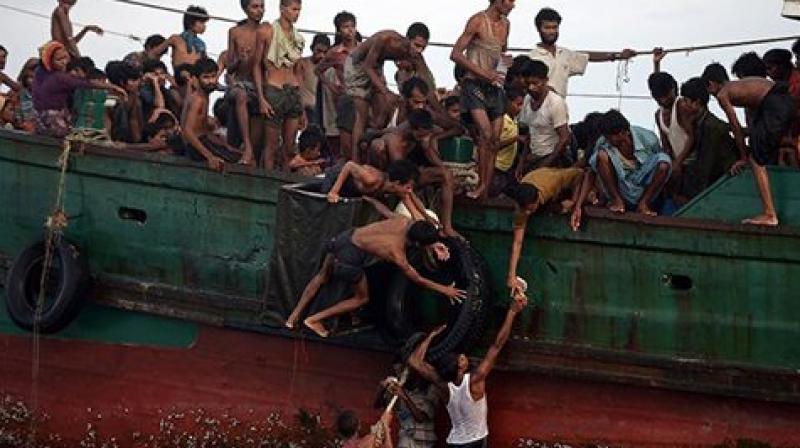 The NHRC recently issued a notice to the Centre over its plan to deport Rohingyas, who are residing in various parts of India. (Photo: AFP)

Addressing a seminar organised by the National Human Rights Commission (NHRC) he said, "They are not refugees, nor have they taken asylum. They are illegal immigrants."

The Centre on Tuesday had said the continuance of the Rohingyas’ illegal immigration into India and their continued stay was found to have serious national security ramifications.

It had filed an affidavit in the Supreme Court over the issue, which will be heard on October 3.

Singh added that it will be baseless to not deport them, when Myanmar was ready to accept them.

"Why some people are are objecting to the deportation of Rohingyas when Myanmar is ready to accept them?," he asked.

Myanmar State Counsellor Aung San Suu Kyi on Tuesday broke her silence over the ongoing humanitarian crisis which led to evacuation of over half-a-million minority Rohingya Muslims from northern Rakhine state and said the country is ready to verify status of refugees 'at any time' to aid their return.

Singh further added that the process to adopt a refugee status had not been followed by the Rohingyas.

Speaking on the deportation of Rohingyas he said, "India won't be violating any international law by deporting them as it is not signatory to 1951 UN Refugee Convention."

The NHRC recently issued a notice to the Centre over its plan to deport Rohingyas, who are residing in various parts of India, reported PTI.

According to the Commission, from the human rights angle its "intervention is appropriate" in the matter.