Earlier on Friday, 3 SPOs and a police constable were kidnapped by terrorists from Shopian in South Kashmir. 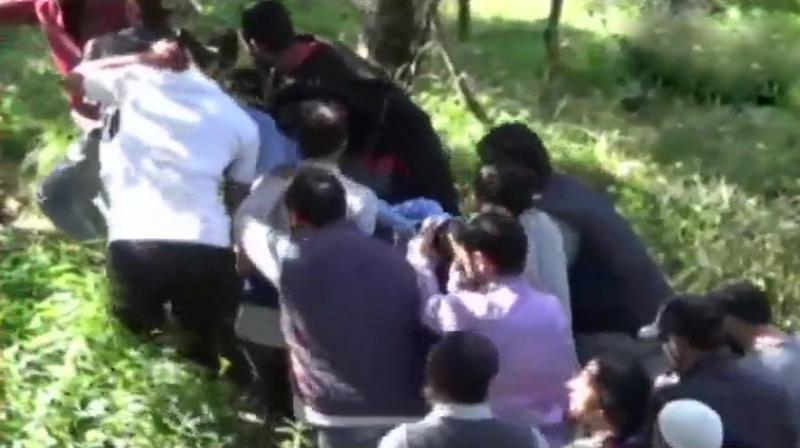 The terrorists barged into their houses in Karpan village and dragged them out. (Photo: Twitter | ANI)

Srinagar: Three Special Police Officers (SPOs) of Jammu and Kashmir who were kidnapped early on Friday morning have been killed by terrorists.

Terror outfit Hizbul Mujahideen is behind the abduction and killing of the police personnel.

Earlier today, three SPOs and a police constable were kidnapped by terrorists from Shopian in South Kashmir.

The terrorists barged into their houses in Karpan village and dragged them out.

The incident comes after a video from the the terror group Hizbul Mujahideen which has gone viral on social media in Jammu and Kashmir since Tuesday threatened security forces and government officials in the state to either resign in four days or get ready to be killed.

In the video, the terror group threatened to kill the family members of those who “stay back” at work.

The two-minute video reportedly showed pictures of security forces and a Hizbul banner with a voice-over issuing the threat.

The voice is believed to be of the terror outfit spokesperson Umar Ibn Khitaab.

PDP leader and former chief minister of Jammu and Kashmir Mehbooba Mufti condemned the killings and said "Centre's muscular policy is not working at all. Dialogue, the only way forward seems to be a distant dream for now."

Three more policemen have lost their lives to militant bullets. Outrage, shock & condemnation will be expressed by all of us on expected lines. Unfortunately, it brings no solace to the families of the victims. 1/2

Clearly, with the rise in kidnapping of police personnel and their families, Centre’s muscular policy is not working at all. Dialogue, the only way forward seems to be a distant dream for now. 2/2