A brief phone call talk took place between the two sides this noon. 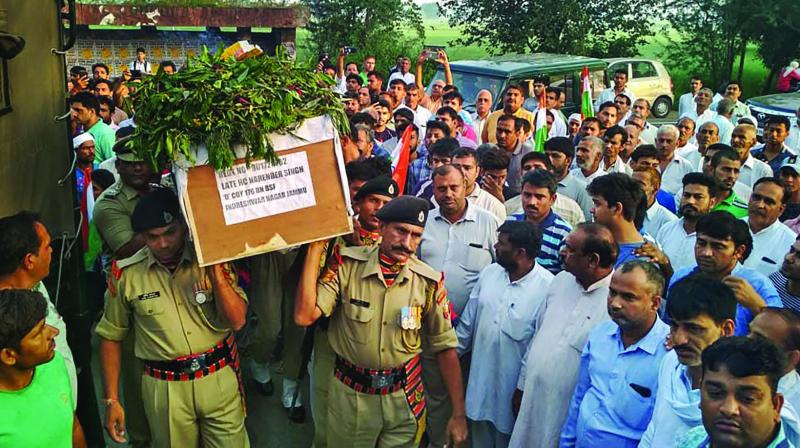 BSF soldiers carry the body of head constable Narendra Singh after it arrived in his native village in Sonipat, Haryana, on Thursday. The body of Singh, who had gone missing near the international border with Pakistan on September 18, was found with his throat slit. (Photo:PTI)

New Delhi: The BSF has registered a strong protest with its Pakistani counterpart over the killing and slitting of throat of one of its jawans in Jammu and has told the Pak Rangers that the act was “unsoldierly”, official sources said Thursday. They said the atmosphere along the border areas was “tense” and a high alert is in place along this region of the Indo-Pak international border.

The sources said the Pakistani side, which spoke to the Border Security Force officials in the noon over phone, “denied any hand” in the killing of Head Constable Narender Singh on September 18.

The Indian side termed the act as “unsoldierly”. It was informed that Pakistani troops “shot and killed” the BSF trooper, they said.

They added that on getting this response, the BSF told the other side that any future misadventure on the India-Pakistan border will be the responsibility of the Pak Rangers.

“A brief phone call talk took place between the two sides this noon. When it was brought to the notice of Pakistan that they had killed the jawan by resorting to unprovoked fire, they flatly refused any hand of their troops in the incident,” a senior official said.

This was the second round of protest that the BSF registered with their counterparts in the last over three days over the killing and throat slitting of their jawan who along with seven others had gone beyond the border fence in the Ramgarh sector as part of a elephant grass (sarkanda) cutting patrol.