India   All India  21 Sep 2018  No policeman has resigned in Jammu and Kashmir, confirms MHA
India, All India

No policeman has resigned in Jammu and Kashmir, confirms MHA

The Home Ministry said J&K has a professional and committed police force which is fully geared up to meet the security challenges. 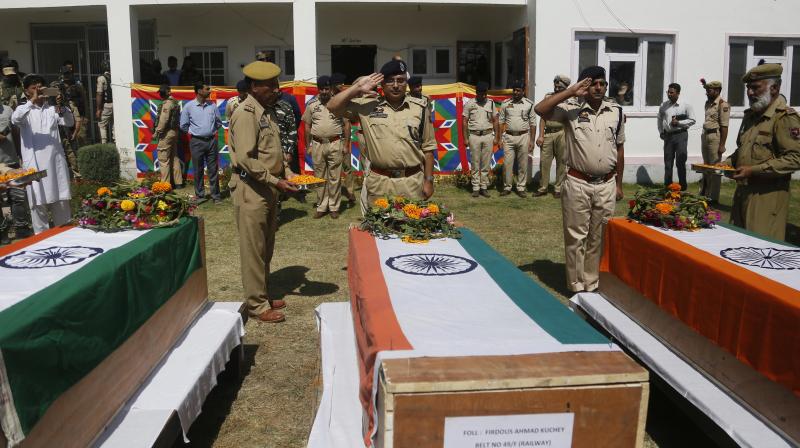 The three policemen were abducted from their homes in south Kashmir's Shopian district and shot dead in cold blood by the Hizbul Mujahideen. (Photo: PTI)

New Delhi: The Home Ministry on Friday said no policeman has resigned in Jammu and Kashmir following the killing of three police personnel by terror group Hizbul Mujahideen and described such reports as "false propaganda" by "mischievous" elements.

In a statement, the ministry said reports have appeared in a section of the media that some special police officers (SPOs) in Jammu and Kashmir have resigned, but the state police has confirmed that these reports are "untrue and motivated".

"These reports are based on false propaganda by mischievous elements," it said.

The Home Ministry said Jammu and Kashmir has a professional and committed police force, which is fully geared up to meet the security challenges, including those related to the forthcoming panchayat and urban body elections.

"There are over 30,000 SPOs and their services are reviewed from time to time. Some mischievous elements are trying to project that those SPOs whose services are not renewed due to administrative reasons, have resigned," it said.

The ministry said militants are on the backfoot in Jammu and Kashmir and 28 militants have been neutralised this year alone in Shopian district, where the Friday incident took place.

"Due to pro-active actions of the state police, militants have been pushed to a corner and are being driven to desperation," it said.

The three policemen were abducted from their homes in south Kashmir's Shopian district and shot dead in cold blood by the Hizbul Mujahideen, police said earlier reports suggested that the killings had triggered panic in the lower ranks of the police department with at least six policemen resigning.

Two of them issued video messages dissociating themselves from the force.

"My name is Irshad Ahmad Baba and I was working as a constable in the police. I have rendered my resignation...," said one of them in a video being widely circulated on social media in Srinagar.

Tajalla Hussain Lone, an SPO, said he had resigned from the police department on September 17 and was issuing the video to put to rest any doubts, and that Hizbul Mujahideen commander Riyaz Naikoo has several times warned local policemen, especially SPOs, to resign from the force, saying that the government is using them.