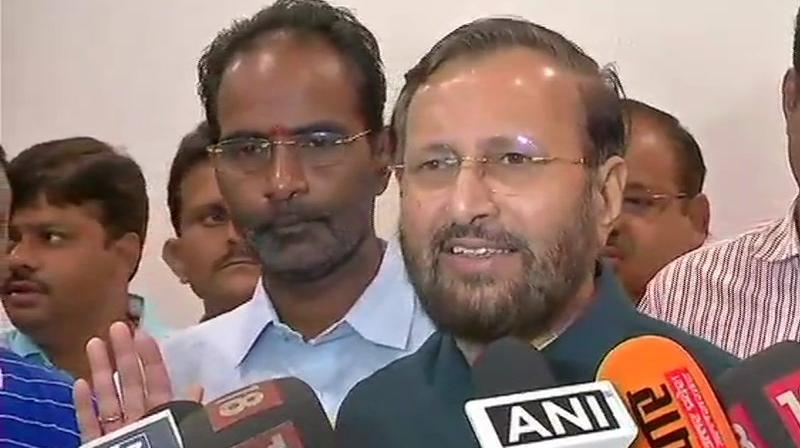 Javadekar told reporters that the ruling BJP differed with the Congress as it only gave advice to institutes to follow a programme while the Congress made following its decisions compulsory when it was in power. (Photo: ANI | Twitter)

New Delhi: HRD Minister Prakash Javadekar said Friday that a University Grants Commission's communication asking varsities to celebrate anniversary of surgical strikes is "patriotism not politics", and it is not compulsory for institutes to organise it.

He told reporters that the ruling BJP differed with the Congress as it only gave advice to institutes to follow a programme while the Congress made following its decisions compulsory when it was in power.

An advisory not a direction has been issued to universities, he said. "Where is politics? This is not politics but patriotism," he said, adding that students needed to be informed about the surgical strikes, and military and civil works soldiers do.

He claimed that students and institutes had made suggestions that the second anniversary of surgical strikes, which the Army had carried across the border in Pak-occupied-Kashmir on September 29 in 2016, should be commemorated.

Colleges have been asked to organise parades by National Cadet Corps (NCC) and lectures by ex-army officers. Asked why it was not commemorated last year, he said a good suggestion can be executed anytime.

The University Grants Commission (UGC) had Thursday directed varsities and higher educational institutions across the country to observe September 29 as "Surgical strike day".